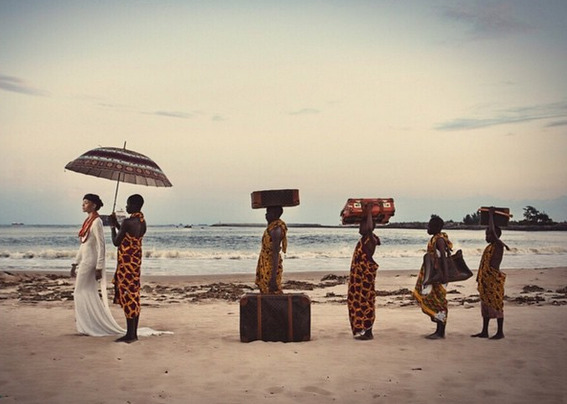 An editorial surfaced on the internet roughly a week ago belonging to ‘This Day Style’ magazine. It was republished on various fashion blogs and social media immediately for promotional purposes. Uncomfortable with what we saw, we reframed from publishing it on FashionGHANA.com. The editorial seemed like what could be a good set of images with male musician Lynxxx until it furthers on into a couple of images with British actress Eku Edewor above and below that did nothing but depict colonial style, child abuse.

There are so many things wrong with this picture. Firstly, the use of children is just appalling and sickening, and the photographer who doesn’t deserve the mention or promotion here has really done Africa a disservice. Secondly, the use of female British actor Eku Edewor (wearing Iconic Invanity) who probably has some Nigerian roots, surrounded with dark-skinned children acting as slaves, the team behind this shoot really did mean to send a message.

We’ve got lots of pages of this type of mockery from Vogue magazine. One flattering relief of Africa having it’s own editorials is so we can be clear of unfairness, injustice, and insulting imagery such as this, whilst giving a chance to all talents from around the world. Unfortunately, if this is any indication of the direction ThisDayStyle is going, one of Nigeria’s biggest publications, then this might not be a reality to look forward to in Africa’s editorials.

One or two comments have argued that this is a Nigerian culture where the children carry the bride’s items or whatever the case may be before the marriage, and believe it or not, the British lady is defending this on her Twitter and Instagram. Despite the fact that any such culture doesn’t exist, if so, these kids sure don’t look like relatives.

What we can all learn from today’s world is projecting racist slurs and imagery towards black only gets you more promotion from complaints and yields no justified consequences, it helps you up the success ladder as there is never any organized backlash. And Eku Edewor and the This Day team are fully aware of this because it is obvious she would never engage in anything as such insulting to Britain. Maybe this day deserves a boycott for insulting the people of Nigeria.

For those who think it is just fashion, please take a look at current international incidences around the world and how Africans are treated, from Libya to Egypt, to Israel to Italy and see how your black skin tone is being undermined, and know that major negative depictions and minor ones such as this, is what adds up to this. Suitcases and umbrellas didn’t suddenly fall on those kids’ heads. They must have had a laugh asking those young boys to play that role, and I can assure you they probably didn’t pay them any fair model extra rates.

For those who find child labour and/or the depicting of racial images in order to sell fashion offensive, please let This Day Magazine know what you think in the message form below. We would have included Eku Edower’s email, but she probably busy riding the backs of one of those kids to her wedding.

Shameless. So much 2 say, but its not even worth it.

That is far from the issue. why are they even projecting this as a fashion editorial. Its disgusting and I looked around it is obvious large numbers of nigerian people are disturbed by the shoot.

Am saddened by the picture, Nigerian models and the fashion industry should speak against it.

We black people need to fall in love with our dark skin and shed our own inferiority complex.It’s really appalling that we would do this to ourselves.it just goes to show how brainwashed we are.Black is beautiful!

Black people complain on for everything. It is photos only.

Find one picture of a black woman with white child servants and I might agree with you.