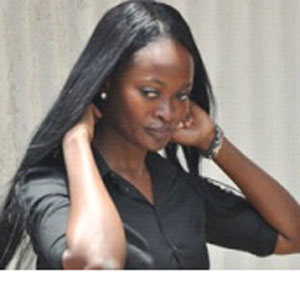 Sandra Sorice, a 33-year-old Ghanaian model based in Germany, has been busted by German security agencies for allegedly swindling an unsuspecting businessman from Essen, a small town in Germany, of more than 750,000 Euros (approximately GH¢2.6 million), DAILY GUIDE has gathered from sources in Germany.

Ms. Sorice, who was picked up together with her 47-year-old investment banker boyfriend early this month, was accused of deceiving the businessman under the pretext that they could supply him with gold dust, but disappeared promptly after he (businessman) had paid the 750,000 Euros in several tranches.

“…they are said to have led the businessman to believe that the pre-payments are necessary for fees and export taxes,” German newspaper Dusseldorf Express reported on April 9, 2014.

Sources in Germany have told DAILY GUIDE that Ms. Sorice and her accomplices are currently in police custody after the office of Criminal and Customs Investigations had raided her apartment and that of five other suspects in a town near Dusseldorf.

According to the Dusseldorf Express, Sandra Sorice and her boyfriend are believed to be the main perpetrators of a gold scamming ring in Germany.

Another German newspaper, Neue Ruhr Zeitung, reported that Ms Sorice posed as the daughter of a Ghanaian prince whose family owned a gold mine. According to the newspaper, Sandra might be in for the long haul because she had been noted for such scams.

About two years ago, a regional court in Dusseldorf sentenced her for a similar issue, and she is still on probation.

In 2010 she was said to have fleeced an amount of 300,000 Euros from a Norwegian businessman. The money was meant for the payment of a purported gold dust from a Ghanaian mine. That same year, she was involved in a deal with an American businessman who parted with approximately US$1.6 million for 831 kilograms of gold.

The deal quickly went burst and she was dragged to an Accra Circuit Court.

Sandra Sorice and her driver, one Yussif Ahmed Akpakli, were cited for defrauding the American businessman of the amount.

The court, presided over by Ivy Heward-Mills, granted them a GH¢300,000 bail with four sureties each after her lawyer, Victor K. Adawudu, had pleaded for bail for them.

They pleaded not guilty to two counts of conspiracy to commit crime and defrauding by false pretences.

Information available to DAILY GUIDE indicated that Sandra, in 2005 got married to one Stefano S., a multi-millionaire management consultant. The couple was said to have lived a life of luxury, dashing to Las Vegas and other prime locations worldwide. But soon the glamour faded, as she was said to have taken 500,000 Euros from her husband, leading to a divorce.

She was said to have started her new trade of gold deals after the divorce, boasting to businessmen that her family owned gold mines – a tale that enabled her to swindle them out of their cash.

i know her, i live in Düsseldorf too and manage some models.

#MODELCRUSH: Once You Gaze At Her You Won’t...