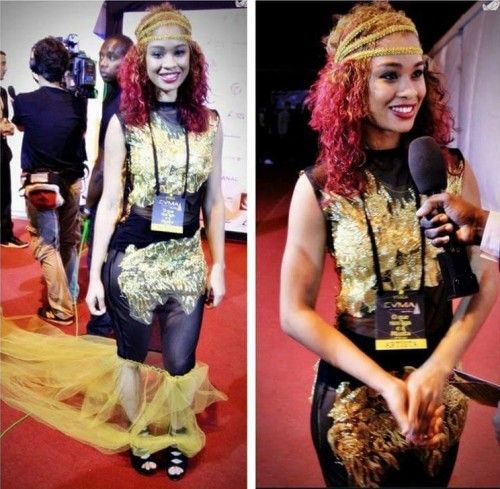 A female rapper Nissah aka The Baddest Kriola, and a very beautiful one at that, from Cape Verde became the talk of the Cape Verde Music Awards which took place in Praia on the 7th of March. This is not because she won any awards or such, but simply because of a bold fashion statement that shocked the nation. And it wasn’t because it was fancy, but because she was ridiculed by the Cape Verdean community, which extends across Cape Verde itself, other Portuguese-speaking countries, and also, America.

As big as things got within the CV community, the situation exploded, even more, when Nissah took to her Facebook and published a video lashing back offensively against her critics where it became a national concern being documented in magazines, newspapers, and CV blogs.

The truth behind the matter is not so much that Nissah had worn a horrible dress, the truth is that Nissah had worn the dress the wrong way. Prior to the Cape Verde Music Awards, the designer Joseph Da Silva (https://www.facebook.com/mimidasilvadesigns), who is also facing ridicule, had created a mini video to show Nissah’s colleague how the dress should be worn in the video below. Although quite complex it still made sense to some extent, at the same time one can see why Nissah wore it her own way.

More Articles You Would Love
Post by Josefa Dasilva.

As things got more tensed, Nissah took down the video and a few days later she responded with an apology video pasted below. PS: It’s in creole!

If none of the videos above play, this could be a change in the privacy settings of the above accounts. Nevertheless, it goes to show how your fashion statement could really tip your career. The last time a dress got this much attention from Cape Verde was the condom dress shown at Noite Branca Fashion show. So if you do not wish to be the talk of your town make sure you get the right dress, and if you get it, wear it right.

Nissah is a very popular Creole artists with viral songs on youtube. For now, let’s enjoy some of her great music below….

The dress still looks bad even in the video.

This is stupid, she should be able to wear it how she wants. She shouldnt have apologized.

Welcome to the life of a celebrity darling. Deal with it and dress well, or get out of the spotlight.