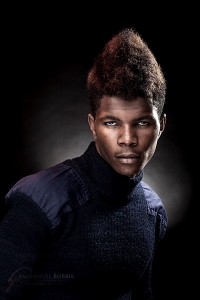 Judges at the Faces of Exopa 2012 didn’t confuse anyone when they awarded Roland Paul as the male Face of Exopa 2012, and Janet Afi as the female Face of Exopa. The event took place at the ExopaBurg in Accra on the 29th of December, 2012. The selected two deserved to win. There isn’t much to say about the event, except the fact it was a fun and enjoyable show.

The selection of the male models was great. The crowd was very generous with their applause and cheers, more generous than I have seen at most events in Ghana. The fashion show and designers was just about ok, however the side attraction performances took out to much time and distraction. On the other note, Kwaw Kesi was great as usual. Overall the show runned smoothly.

But what tips it off are these amazing images by Emmanuel Bobbie of Bob Pixel photography. Below is a shot of the female winner Janet Afi, and to the left is ‘not’ Roland Paul, but the 1st runners up. Roland’s picture are yet to come and apparently are really great. Watch out for the video soon to come on FashionGhana TV.