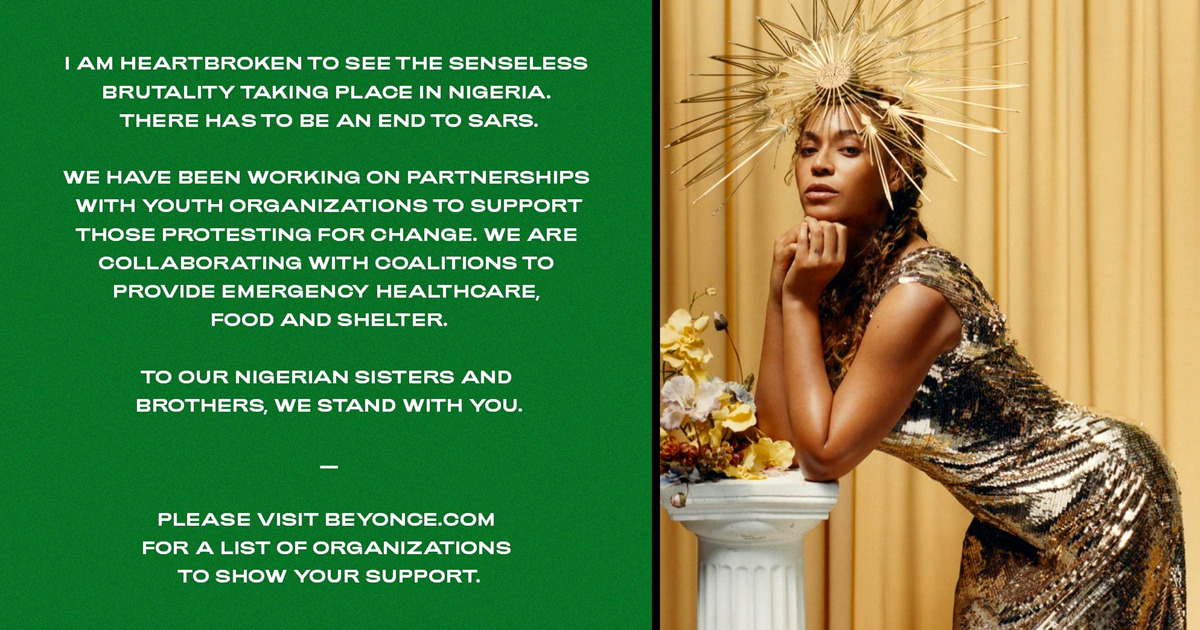 Beyonce finally share her sentiments towards the ongoing police brutality taking place in Nigeria, where 10,000s of people have taken to the streets to protest SARS under the banner, #EndSARS and innocent lived have been lost. SARS was a special police unit set up in 1984 as Nigeria, Africa’s most populous country, battled rising levels of crime and kidnappings.

Initially, it was successful in reducing cases of violent crime but more recently the unit had been “turned into banditry”, according to Fulani Kwajafa, the man who set up SARS.

The protests were sparked by a viral video allegedly showing SARS officers killing a young man in the southern Delta state. Authorities denied the video was real.

The man who filmed the video was arrested, provoking even more anger.

The #EndSARS protests have taken place in several cities across the world including, London, Berlin, New York and Toronto.

Last Night, Beyonce took to social media to expand on her position in the ongoing protest. In a message below, the ‘Girls Run The World’ singer clarified how she is “heartbroken to see the senseless brutality taking place in Nigeria”.

She emphasized that she is “…collaborating with coalitions to provide emergency healthcare, food, and shelter” for protesters. She also outlined people can visit beyonce.com to find ways to support the protest.

DISCLAIMER: We will kindly state that it might also be helpful to have direct communication with individuals on the ground about how to help. Big organizations have been known to exploit and milk black tragedies as charities using celebrities to gain leverage, like that of Haiti.

See her statement below.