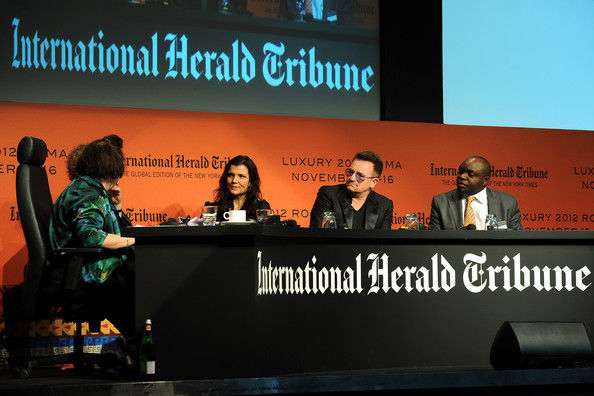 With the combination of the growth in the African fashion industry and the booming economy and technology, it is very clear to many that Africa is set to be the hub of trends and consumption. Foreign fabric companies such of those in China and Vlisco are now intensifying their marketing campaigns to sustain some monopoly on their share of African fashion. But even more so, a new social crowd that has neglected the progress of African fashion for decades are also setting their eyes on the booming world of African fashion and Africa.

The IHT’s 12th annual Luxury Conference was subtitled Luxury Fashion and Africa and had various popular guests from the European fashion industry such as Vivienne Westwood, Manolo Blahnik, and Jean-Paul Gaultier. A few articles have exposed many formidable European brands taking advantage of cheap labor in China and some other Asian countries. Nevertheless, we see that the rise of minimum wages in China is driving a fair number of foreign businesses out. Hopefully, the exploitation of poverty and cheap labor is not why some attendants of the IHT Luxury conference are setting their eyes on Africa. Amazing designers from Africa are trailblazing around the world in African fashion weeks and shows, to even African Fashion Weeks outside of Africa. Meanwhile, with a declining economy in Europe, cheap labor in Africa might just be what many Europe-based luxury designers might need to support their production.

Critics also acknowledged it was not only productions that were a major part of this conference, but also consumption. African working class was identified as the new economic engine following studies carried out, United Nations Conference on Trade and Development (UNCTAD) has reported that Africa is the second most connected region in the world after Asia. ‘Nigerians visiting the UK between July and September outspent Americans, with an average monthly spend per person of £498 – up 18% on the previous annual average – while the US spend fell to £495, down 2% on the yearly figure’ (Drapers). Slightly different to Ghana, Senegal, Kenya and more, Nigerian’s tend to spend a lot more on foreign fashion in comparison. Debenhams’ in UK, Oxford Street, branch has put up signs in Hausa, one of the official Nigerian languages, and said customers from this part of West Africa are its biggest overseas spenders.

But with the growing designers, fashion weeks, and independent media in Africa, the course of fashion could either turn to be a lucrative industry to support a good portion of Africa’s unemployed creatives, or expand and open doors where our drive for fashion in Africa becomes a hub of for sales for foreign entities, brands and corporations with sweat shops and economic exploitation, leaving very little returns for the locals, long term and short term. According to The Daily Beast, Franca Sozzani, editor-in-chief of Italian Vogue said. “Africans are big spenders across the world, but they cannot spend their money at home,” She also said…“We need to help them.”, them being us Africans. Not willing to be a skeptic and not in reference to Franca Sozzani, but when the words ‘help’ and ‘invest’ are loosely thrown around in business discussions about Africa, I simply conclude it to mean ‘monopolize’.

Africa is had a long hard share of struggling in the fashion industry, not one that start recently, but ongoing probably before you and I were born (or some of you), it has purely survived by the amazing love for creativity amongst the few of us that chose to be designers. Help has always been needed. But right about this time, it is probably needed the least. With the rise of Africa’s economy, social and independent media and blogs, events and more, we have seen an unimaginable rise in African designers across the world now becoming internationally recognized. This has been heavily supported by the dispersed amounts of young Africans in many countries and their various entrepreneurial fashion activities. Let’s be honest, this is not the time where helpers show interest, that was decades ago, this is the time that excites those who want a piece of the pie facing dilemmas if they should jump on board.

At this current time, Africa’s only biggest worry for the growth of its fashion industry is, does it bear enough principles to support itself? Would magazine editors in Africa start pushing out low advertising offers when wealthy European designers slap them across the face with dollars? Would the consumer public automatically turn a blind eye to their home-grown designers when that big billboard with half-naked skinny European models lands on their streets? Will musicians use their popularity to boost African designers or go the commercial rap music route promoting every brand that is foreign to their communities? What if I told you some African clothing companies have been exempted from renting department stores in malls because foreign competitors paid the owners to exclude competition. It’s already in process, many Africans today even confuse foreign fabrics as African fabrics, despite the fact they are not designed, not printed, not managed, not financially nor economically beneficial to, nor even administered in Africa.

‘As the fashion industry takes notice of the continent, some fear that high hopes will soon give way to exploitation and sweatshops’ The Daily Beast. What would have been more feasible and more convincing that the IHT conference was direct at the support of of the luxury industry, would have been the inclusion of designers from Africa. However, it is a nice acknowledgment that the African fashion market is headlining such conferences abroad, and shows that nothing goes in vain. For all the designers that made clothes for free to popularize their brands, for all the models that walked for free, for all the photographers that took a picture for free, and to all the media that published African fashion and creatives for free, should we say, this is an indication of your pay.