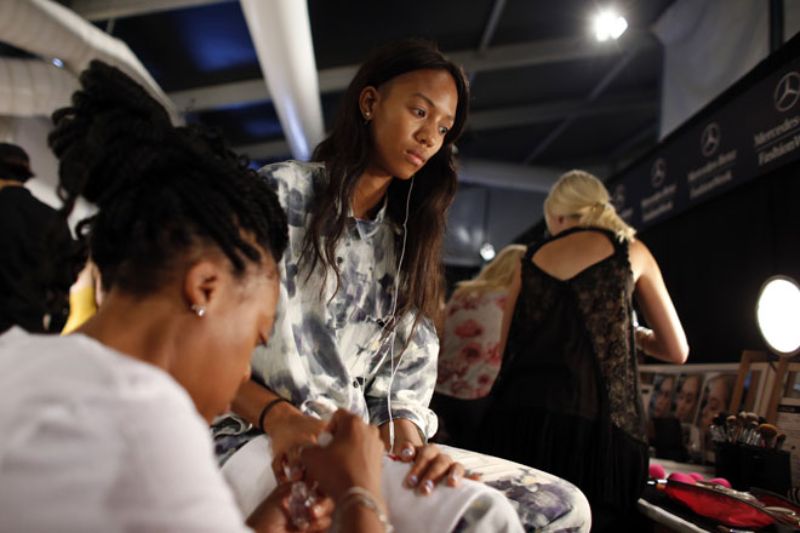 Fashion Week Models Have Their Own Stories To Tell 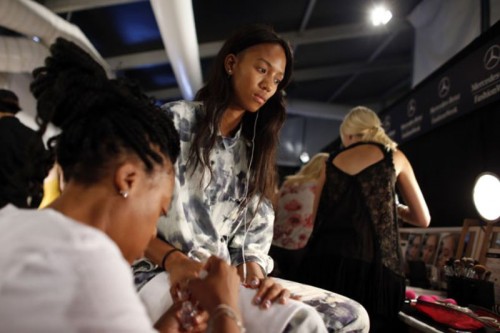 They’re the often-anonymous stars of New York Fashion Week — the models who walk the runways in designer clothes, looking mostly impassive and inevitably beautiful as they pose before cameras.

Their lives off the runways, however, remain for the most part a mystery.

Consider Mari Agory, whose family fled the South Sudan for Egypt to escape civil war; Adesuwa Pariyapasat, who was discovered by a scout in Nigeria at 17; Abiah Hostvedt, whose life on the road sometimes makes him homesick for his native Jamaica.

Agory of South Sudan has glitter applied to her eyelids backstage before the Christian Siriano show last weekend during Fashion Week in New York. Born in Khartoum, Sudan, Agory’s family lived in what is now known as South Sudan. The youngest of eight children, she and her family fled to Egypt in 1999 during her country’s civil war, where they were granted political asylum by the United States, eventually settling in San Diego, Calif. Agory, 23, was discovered at age 20 by a photographer while attending her junior year of college. For Agory, homesickness is her biggest hurdle. “Especially when I go over to Europe,” she explains, “but when I’m in New York, for some reason, I still feel close to my family because I’m in the States.” Despite sometimes going a full year between visits home, Agory admits that life on the road can also be rewarding. “I get to see the beauty of this world, and it’s part of my job,” she explains.

Pariyapasat, 22, of Benin City, Nigeria, listens to music while her fingernails are painted backstage before the Rebecca Minkoff show. Pariyapasat began modeling only recently, but was scouted while in school in her native Nigeria at age 17. Despite leaving behind both her parents, two brothers and a sister, homesickness isn’t a big problem for her. “I get homesick every now and then, but I’ve moved so much in my life…it doesn’t matter where I am, really.” She says the biggest misconception about modeling is that it’s easy, saying that there is “a lot of psychological damage, a lot of psychological turmoil” involved.

Esken, of Dusseldorf, Germany, rehearses before the Tim Coppens show. Esken, 21, who was just scouted in January, is working at Fashion Week in New York for the first time. Apart from meeting new people, Esken says one of the best parts about the job is getting to travel around the world. “ I’ve traveled to so many cities where I’ve never been before, it’s really good. I like it.”

Jold, 18, of Yekaterinburg, Russia, has her nails done backstage before the Monique Lhuillier show. Jold was scouted on the street in her native Russia, at age 17. She struggles sometimes with homesickness, but says that keeping in touch through services such as Skype helps ease those feelings. “I’m not missing the place, I’m missing the people there,” Jold says, speaking about her hometown. Jold says the hardest aspect of modeling is the physical demands of the job. She explains that sometimes you just “need to recover, vacation, and then you can be fresh again — your skin, your head” and, she says laughing, “your feet.”

Zhao of Beijing rehearses before the Tim Coppens runway show. Zhao, 21, has only been modeling for a year since being discovered by an agency while attending college in his native China. Since then, he has traveled across the world, walking runways in Paris and Milan, in addition to New York. “I like New York,” Zhao says, “it’s a fashion city, I just enjoy.”

Ferr, of Espírito Santo, Brazil, checks her phone as she waits backstage before the Christian Siriano show. Ferr, 18, began modeling at age 15. From the very beginning, being a model was her dream. “I love everything,” she says. As far as her biggest challenge, footwear ranks highest. “ When the shoes is small or big,” she explains, “for walk is very bad.” Although she misses home, she tries to talk to her father and brothers every day via Skype.

Hostvedt, 23, of Montego Bay, Jamaica, has makeup applied backstage. A transplant from Jamaica to New York, Hostvedt, was scouted in Lower Manhattan’s TriBeCa neighborhood at age 17. Having modeled in Paris, London and Milan, Hostvedt says he likes to “use fashion as an excuse to see the world.” Estimating that he is on the road four to five months a year, Hostvedt says that he gets homesick “all the time,” but that using video chat to stay in touch with family, including his daughter, really helps. Although Hostvedt eventually wants to move into acting, he can’t see himself giving up modeling. “I think I’m always gonna model, until the day I die.”

Matsuoka, 16, of Tokyo, has her hair and makeup done backstage . An only child born to a Japanese mother and American father, Matsuoka began modeling in her hometown of Tokyo at age 10. This is her first year modeling internationally. “I’m really homesick,” she says, when asked about life on the road. Matsuoka doesn’t like the uncertainty that permeates her essentially freelance lifestyle of modeling, but she views her career in the long-term. “I would like to do it my whole life if I can.”

Murphy, 27, of Chicago, has her hair styled and gets a manicure backstage. When she’s not modeling, Murphy, who has four Italian Vogue covers to her name, works as a radiology technician in a Chicago clinic. 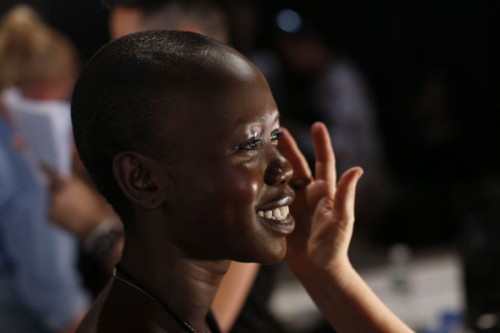 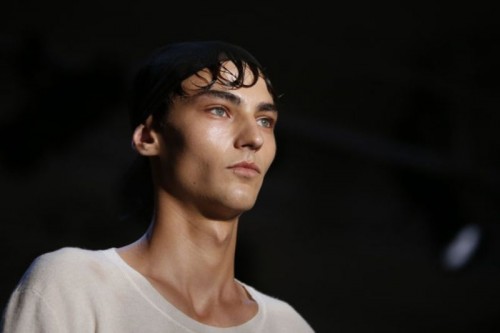 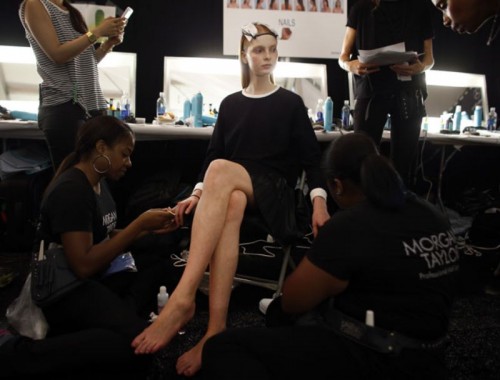 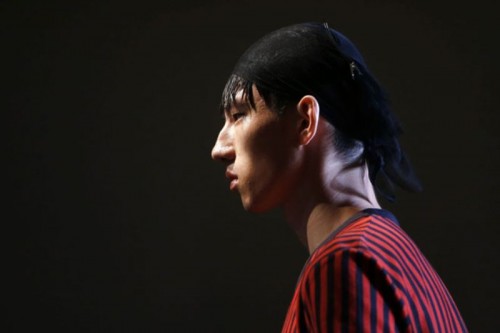 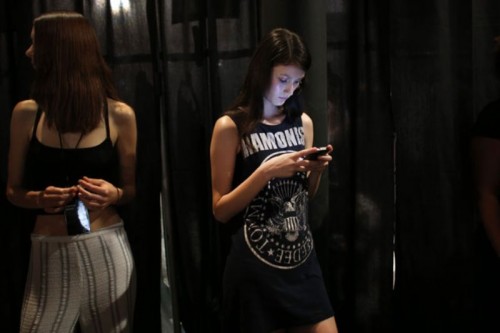 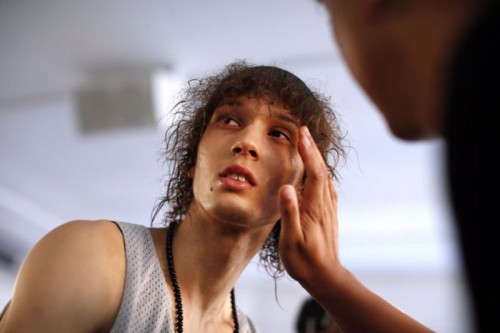 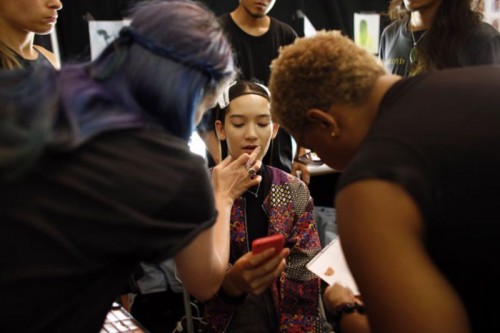 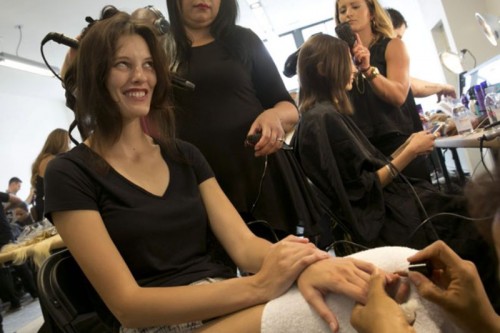