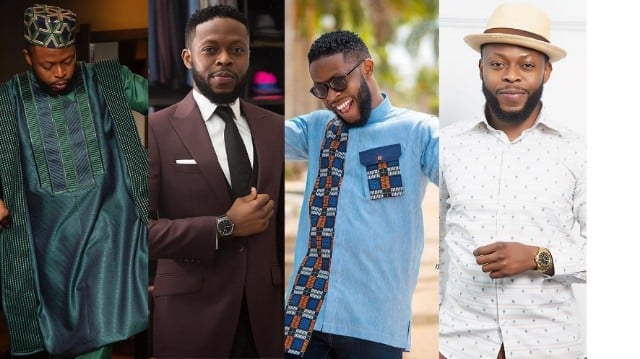 Which Of These Style Does Kalybos Rocks In Best, African Made Or Executive Wear?

Richard Kweku Asante popularly known as Kalybos, is a Ghanaian Comedian and a movie actor that started making waves in  Ghana with a short comedy series “Boys Kasa” in the year 2017.

He has been in the list of some of the best Ghanaian comedians since his year of shine till date. Countless movies in which he has been featured on is everywhere on the internet and his great performance, comics and seriousness can’t be left out of any of his movie discussions.

Kalybos is known as an actor and a comedian and he is really good at it all, but aside his profession, one very thing Kalybos is good at is fashion. Anyone following this man on social media can testify to that. He knows what to wear and the perfect way to bring himself out to look stunning in everything he puts on.

Kalybos is someone who loves putting on hats, and that was his key dress code in his “Boys Abre” short comic series. One thing we have observe on him is that, it’s would be very difficult to choose between African made prints and Executive wear the one he can rock in best.

The Actor has branded himself in a way that, everything he puts on is nothing but absolute fashionable. Looking at some alluring pictures of him on his Instagram page in both African made designs and Executive wears, lets see if you can tell us the one he rocks in best. Lets check how he rocks in African design styles first;

Be your own BOSS. Give way for the spirit of Boldness, Elegance and Fortitude with a Bold Front reckon you ahead. Believe in yourself and be @blackandphamous . . . About last night at the GHANA MOVIE AWARDS ‘19 Outfit by @blackandphamous Photo by @de_essencegh

Just Because it’s SUNDAY ? ? by @manuelphotography___official

Hello WEDNESDAY K – Kwaku (born on Wednesday) K – Kalybos (born as a Boss) New Half collar Half Tunic ARTSHIRT ⭐️ from @abrantiethegentleman well I call it 50/50 (check out the collar design) ??

Not all that wish you well… want to see you exceed… you can only overcome such with LOVE and it is the greatest commandment in the Bible. I LOVE You All… God bless us all Suit by @legend_bespoke ?? Photo by @de_essencegh ? Smile by @kalybos1 ?

Happy birthday to this Reflection I look into the Mirror and I see a work in progress with God as the master architect. It’s a Plus+ 1 blessing. Happy birthday to you KALYBOS Outfit by @legend_bespoke Photo by @de_essencegh