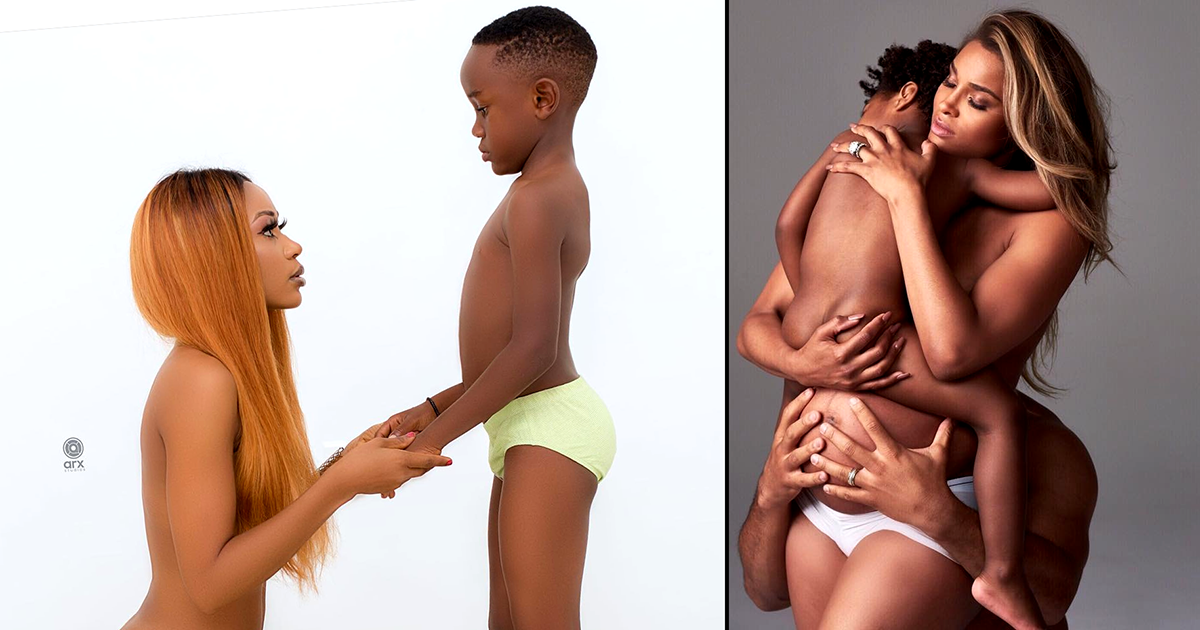 Earlier today, Ghanaian actress Rosemond Brown, popularly known has Akuapem Poloo had the whole nation talking and also insulting her from standing next to her son naked. In case you are not based in Ghana and you need a reminder, she was the lady that challenged Cardi B to a cringing and awkward twerk contest.

The ‘Away Bus’ actress who rose to fame literally attacking many personalities in the industry came under heavy fire for sharing the image below which still remains on her instagram page. The image sees the mother with her 7-year-old son, fully naked whilst he stands right infront of her in his underwear.

The caption read…Son today reminds me of the very day I gave birth to you with no stress and with no regret…..30th June 2013 exactly 4:46am Sunday Haha I still remember this date paa because it’s really meant a lot to me,

Unusual to Ghanaians, the image went viral and has been the talk of the day. Within a short amount of hours, she has faced severe public scrutiny from twitter and celebrities publicly insulting her. A few of her critics are outlined below.

Imagine Shatta Wale, Stonebwoy or Sarkodie w/ their daughters being the characters in Akuapem Poloo’s photo. The so called femists will pull their mouths like borla bird go come talk a whole lot of bs …

Akuapem Poloo is misbehaving this early morning and some so called “local celebrities” are under her post and kissing ass as usual! ❤️❤️❤️❤️ oh nice. Wei y3 nice? Nobody has a problem posing a picture with your son celebrating him. Let’s not condone nkwasiasem in this town. Tchew

The social media star and actress, Akuapem Poloo, came out later to explain to the public that she was not fully naked when taking a viral photo of her stark naked with her son, 7.

In an interview on Zylofon FM, she said her private parts were covered but it is not visible in the photo.

“I was not completely naked. He did not see my organs because I covered myself with a cloth and applied sellotapes to the necessary parts. Besides the picture was taken in my own house,” Akuapem Poloo said.

However the reigns of insults has still been going on.

She even has graphic designer redesigning her image for the better.

Well it seems she’s working to play Gotchya on Ghanaians by posting an image of a nude and pregnant Ciara, carrying her nude son with Russel Williams huggin Ciara’s pregnant belly from the back. Amongst the set of images is also images of US comedian Jess Hillarious who also has nude images of her son.

The image is a silent hit back at her critics as to say, if you are going to get at me, get at them to. And that is how Akuapem Poloo dominated the Ghanaian news for the day. This image didn’t really ring our interest much, however the son did seem quite uncomfortable standing next to her nude judging by the posture of his neck and blunt facial expression. He looks much happier when she was clothed as seen below. Happy birthday to him, and be grateful your mum didn’t do the same to you.