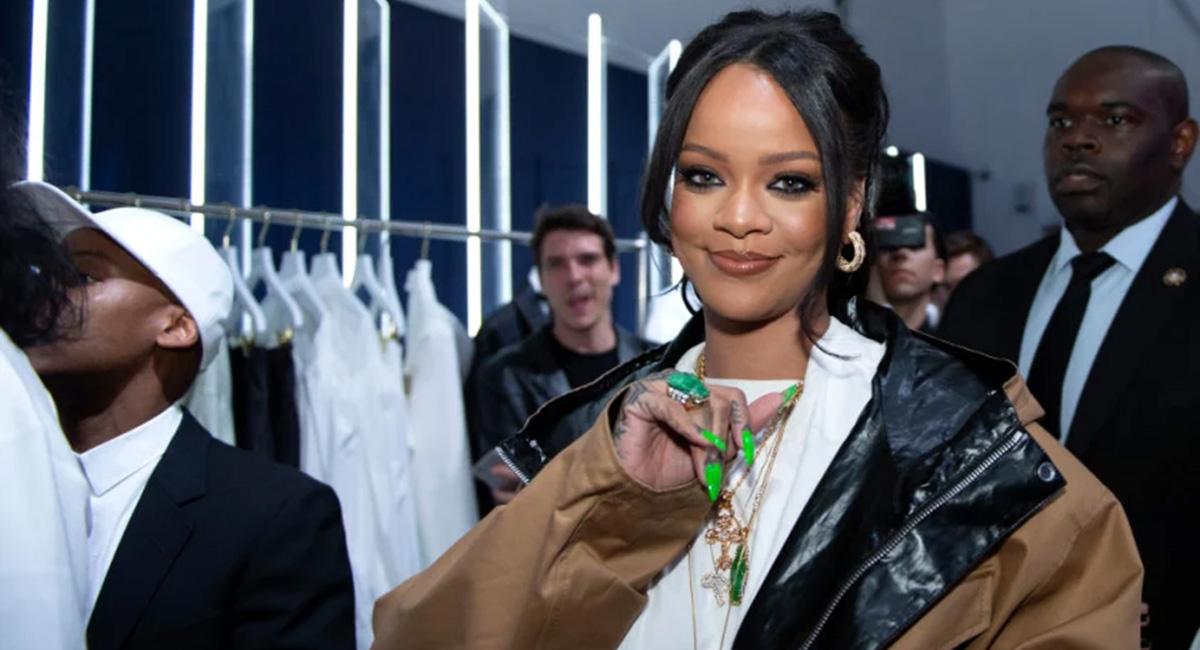 Ghana Look Books Rihanna, the big pop star who has never been seen in any outfits by a black designer, nor shouted out any black own products in her music is suddenly pushing the message for ‘Buy Black’ on the dawn of launching Fenty.

Most people will confuse the core essence of this article as one to undermine Rihanna and that’s fine. Although any visitor to this website can use our search and see that we fully support and adore the singer in every way but will also call out the ‘Bee Es’ when we see it, even if unpopular.

It’s seems now LVMH has it’s bold high fashion weapon capable of tapping into the black/urban market and that is Fenty. Other major brands owned by LVMH are Fendi, Givenchy, Dior and more and don’t under estimate their interest in the black market as we witnessed recently with the Dior cultural appropriation show.

We wrote an article that acknowledged Rihanna had sold one of the only black fashion labels with potential that went viral. Since then, there has been many publications promoting the fact that Rihanna is in full control of Fenty but we don’t buy it. Creative control possibly, but as far as ownership, it is obvious Fenty is no longer black owned. But that’s okay, however lets dissect the ongoing media manipulation.

Other than LVMH owning all the brands under it’s Umbrella (lol), what also gave away that Rihanna had lost ownership of Fenty was the PR stunt of the celebratory note that ‘Rihanna Is The First Black Woman To Launch A Line Under LVMH’, that was definitely a cover up to make the African society celebrate something they had lost.

Lines such as Fendi, Givenchy, Dior and more, are too high fashion to raise their heads amongst the black communities. Thousands of their clients will run from the brand if they were to see the odd rappers used in their campaigns and bill boards, or the kind of marketing that will appeal to the urban cities.

So there has been a consistent use of what we call invisible, or shadow marketing. That is when they take top icons of the urban societies and dress them up in their garments, either by pay or sponsorship. You will see this in the constant promotion of such high fashion brands in hip hop and rap music. That way they reach out to the urban societies whilst their high end market are not applauded by seeing them any where in the marketing.

However, with a changing world, Fenty was and is that high fashion brand that can penetrate both markets and Riri sold it. Hence the intense marketing to reach out to the black community and here are some obvious marketing shots.

Exhibit 1: The announcement of Rihanna being the first every black woman to have a line with LVMH.

Why was this information important, why couldn’t the announcement come without this notice. It was obviously a marketing ploy to engage in the black community. In fact prior to this, Rihanna had never called out on anything black orientated relative to the Savage X Fenty or make up line. She played the ‘we are for everyone’ marketing approach.

Another press release sent out that went viral in Africa especially Nigeria, with almost every major publication celebrating the 3 second appearance of a Nigerian city in the advert.

Exhibit 3: Rihanna Publishes A Buy Black Image On Her Page

This is somewhat linked to exhibit 4 where she discusses the influence of her brand with British Vogue, however, the selection of the image and the highlighting of buy black is something to think of. Is that not in contradiction to Fenty as it is now owned by LVMH or is that to indicate to her followers that supporting Fenty is buying black? At which point have we seen Rihanna call out a black designer? Even with the recently passed Nipsy who she acknowledge, not once has she faulted Marathon clothing on her wall.

She has never been seen on the red carpet with a black designer’s outfit neither. So it really is puzzling if the image on this message was relevant being posted on her wall or if it wasn’t in anyway at all.

“When I was coming up with the concept for this release, we were just digging and digging and we came up with these [Brathwaite] images,” Rihanna said told the magazine “They made me feel they were relevant to what we are doing right now.” AJASS was a group of young artists and creatives who threw community fashion shows with dark-skinned, natural-hair models. They promoted modern takes on African-inspired fashion at a time when “dressing nicely”

As per usual, this article is going to whine up a lot of Rihanna fans, but as said a few lines above, Fenty is the great cash cow for LVMH to tap into the black market. The adoration for Rihanna and her worldwide status plus instagram following is definitely going to get them gold. Allowing them to be urban whilst staying high fashion, like the muse herself.

It is fine to buy Fenty not that we can control your spending power, but if so do so because you support or admire Rihanna or you like their marketing or their clothes. She is a talented and beautiful revolutionary changing the game on many fronts, but don’t be fooled to do it on the basis of some pseudo covert ‘Buy Black’ movement that seems to be it’s marketing stick. If you wish to do so, Marathon clothing by Nipsey Hussle is looking really good at the moment.