Kente cloth has been a cloth of royalty. It’s hand made wooven process is what makes it rare and expensive. We were it, we love it, but most of us have little to know clue what the symbols and patterns means. G. F. Kojo Arthur and Robert Rowe conducted a search in 1998-2001, you will be shocked to read about what it is you are wearing.

Click left and right to see the fabulous kente clothes and their meanings. 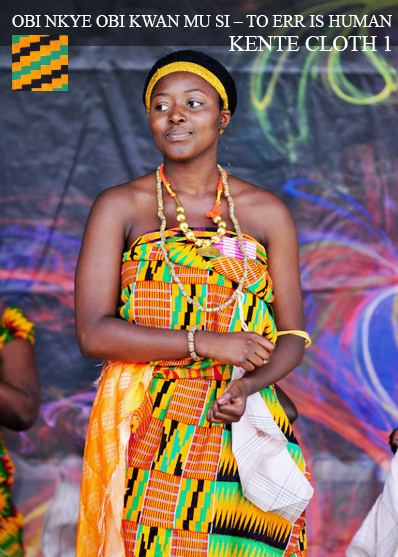 Symbol of FORGIVENESS, CONCILIATION, TOLERANCE, PATIENCE, and FAIRNESS From the maxim: Obi nkye obi kwan mu si. Literal translation: Sooner or later one would stray into the path of the other. To err is human, and therefore, one should be conciliatory when one is offended. For sooner or later one may be the offender to the other. 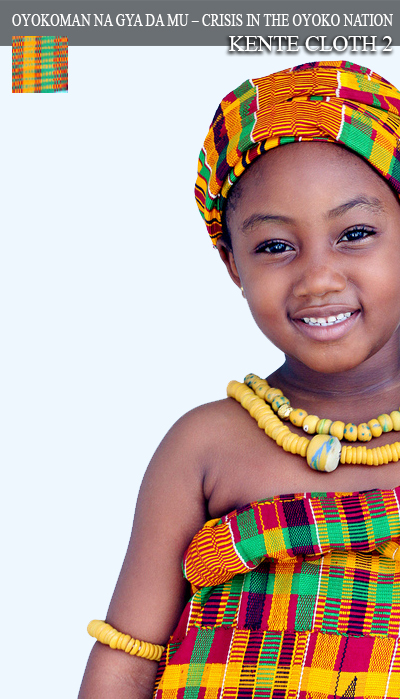 Symbol of INTERNAL CONFLICTS, WARNING AGAINST INTERNAL STRIFE, NEED FOR UNITY IN DIVERSITY, and RECONCILIATION This cloth name commemorates the civil war after the death of Osei Tutu between two factions of the Oyoko royal family. One faction was headed by Opoku Ware and the other by Dako. 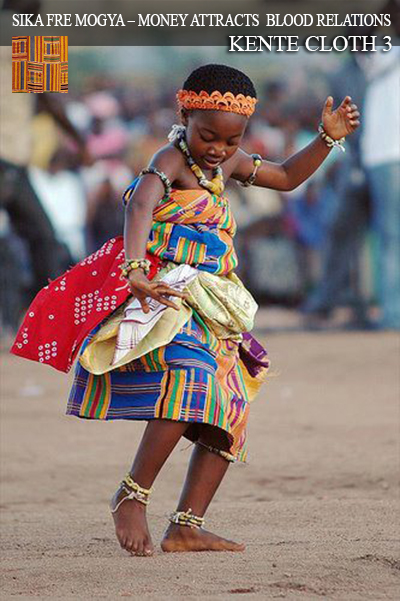 Symbol of FAMILY RELATIONS, RESPONSIBILITY, HARD WORK, and SHARING From the proverb: Sika fre mogya. Literal translation: Money attracts blood relations. Or, Wealth strengthens the family bonds. When one succeeds, one has responsibility to share one’s success with one’s relatives. In the Akan extended family system, the attraction of financial success to blood relations can sometimes be overwhelming. 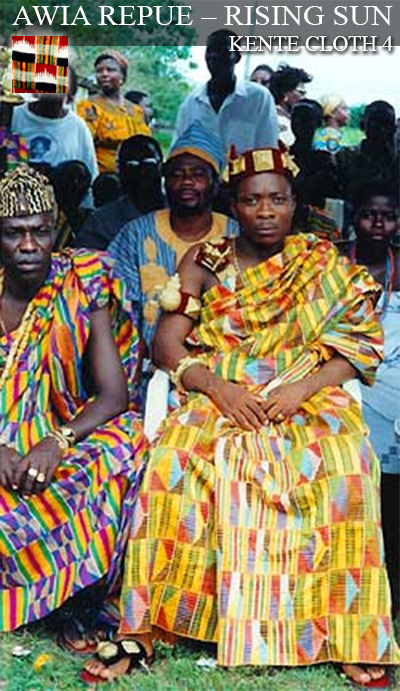 Symbol of PROGRESS, RENEWAL, DEVELOPMENT, WARMTH, VITALITY, and ENERGY This symbol was used by the Progress Party that ruled Ghana from 1969 to 1972 as its party logo. 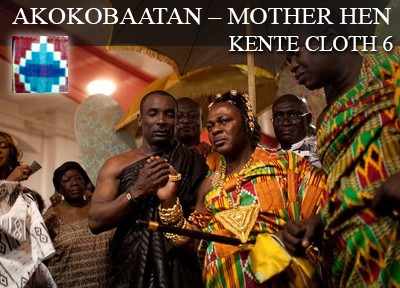 Symbol of MOTHERLINESS, PARENTAL CARE, PARENTAL DISCIPLINE, and TENDERNESS From the proverbs: Akoko baatan tia ne ba so a, onku no. Also, Akoko baatan na onim dea ne mma bedi. Literal translation: When the hen steps on the feet of her chicken, she does not mean to kill them. That is, parental admonition is not intended to harm the child, but to correct the child. Also, The good mother knows what her children will eat. A good mother does not only feed her children food alone, she also feeds them with love, affection, warmth, tenderness and care.

This motif represents the superior military 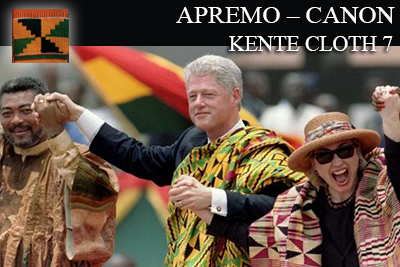 This motif represents the superior military strategy with which Akan nations such as the Asante and Akwamu defeated the Europeans who had superior arms. An Asantehene is said to have remarked: “The white man brought his canon to the bush but the bush was stronger than the canon.” 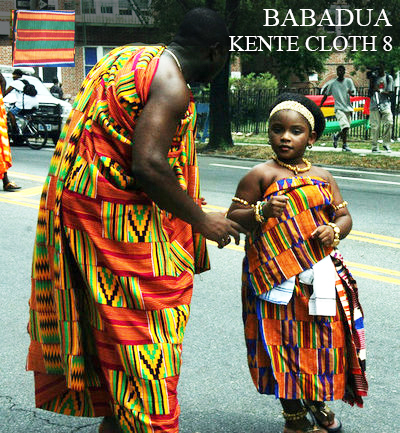 Symbol of STRENGTH, TOUGHNESS, RESILIENCY, POWER and SUPERIORITY The babadua tree was used for building fences and thatch roof frames. In the past, before an asafo (the militia) went to war, it is said that a pile of babadua would be placed on top of a dug-out and a number of the asafo members stood on the pile. If the pile did not break, that signified that they had enough fighting men. Babadua was used in constructing barricades during war, because it was particularly strong and resilient. It was also used in house construction. The use of this motif at the edge of the woven cloth gives tensile strength to the cloth and prevents unraveling or fraying. This is a technical innovation in Akan weaving.

Symbol of BRAVERY AND HEROIC DEEDS 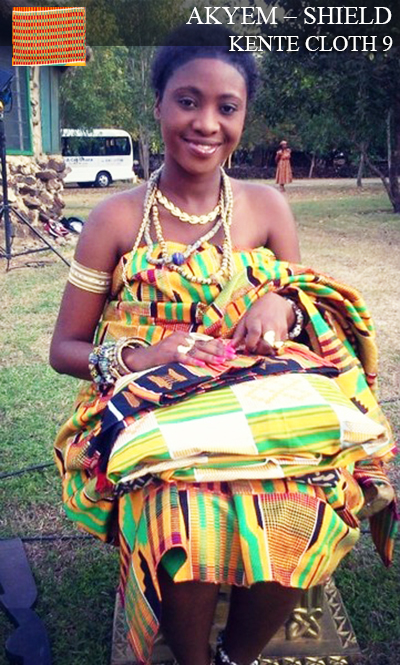 Symbol of BRAVERY AND HEROIC DEEDS, GLORIOUS ACCOMPLISHMENT From the proverb: Akyem tete a eka ne mmeramu. Literal translation: When a shield wears out, the framework still remains. The good deeds of people live after them. 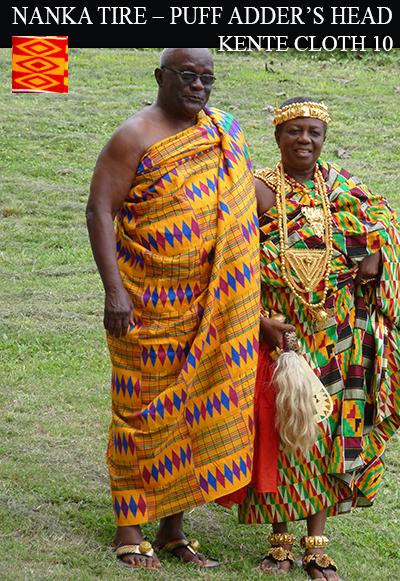 Symbol of EXPLOITATION, BEING OVER-BURDENED WITH WORK From the proverb: Meso annini mentumi a, wose menkofa nanka tire mmo kahyire. Literal translation: I cannot even carry the python, yet you are asking me to use the puff adder’s head as the carrying pad.

Symbol of EXPERIENCE, KNOWLEDGE, SERVICE, ANTIQUITY, TIME, HEIRLOOM, and RARITY From the proverb: Kyemfere se odaa ho akye, na onipa a onwene no nso nye den? Literal translation: The potsherd claims it has been around from time immemorial; what about the potter who molded it? 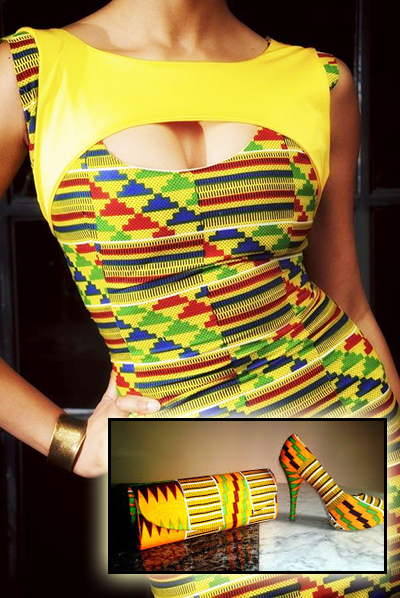 This research was done on behalf of G. F. Kojo Arthur and Robert Rowe – 1998-2001. For some reason a few of the patterns were named and described twice which we left out. Please note that the documented history of the previous patterns do not account for all kente cloths and patterns. There are many more patterns such as the pyramid and zig zag design in the picture above that were not covered in the research but have existed in Ghana and are commonly used just as long as the others. Kente fabric is usually mixed and matched to produce the right touch for all royal fashion needs. Hence why some patterns were spotted in very small segments of the clothes. However, now that you know, we hope this would be a great guide as to how you chose your kente fabric.