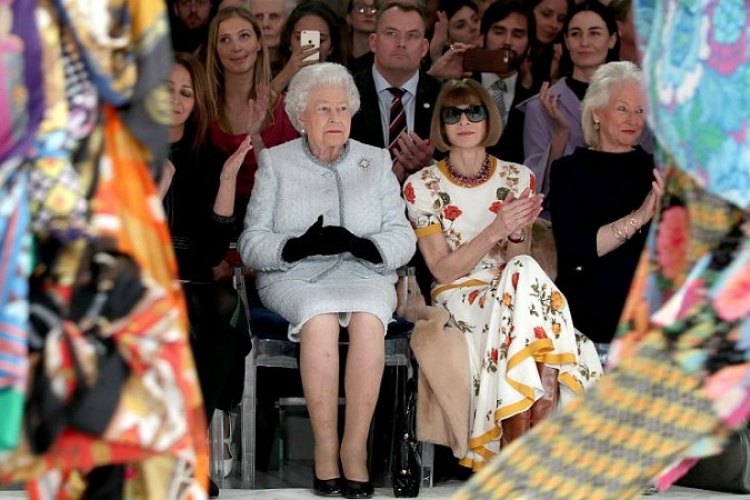 Economy of any country is as strong as its indigenous production and that is a good reason for her majesty, Queen Elizabeth II to cleared her scheduled to attend London Fashion Week to support the industry.

Her appearances at the event will not only make headlines on all news networks but she also reassures the world that England has a viable fashion industry and businesses are welcome.

African governments support for fashion industry has to be felt not only on documents which mostly doesn’t get implemented but should also be seen in active participation.

She wore a pale blue skirt suit with black gloves and shoes for the fashionable event, which saw models take to the runway in floral dresses and motorbike helmets.

Following the show, the monarch gave Quinn the inaugural Queen Elizabeth II Award for British Design, organized by the Royal Household and the British Fashion Council.

“Your Majesty, I know you do not wish to be known as a fashion icon,” BFC chief executive Caroline Rush said as she welcomed the Queen to the stage. “But from all of us in this room, we have the utmost respect for you and also for your hard work and diligence.”

The Queen said the award was given as a “tribute to the industry, and as my legacy to all those who have contributed to British fashion.”

The prize will now be awarded annually by a member of the Royal Family to an emerging British designer.