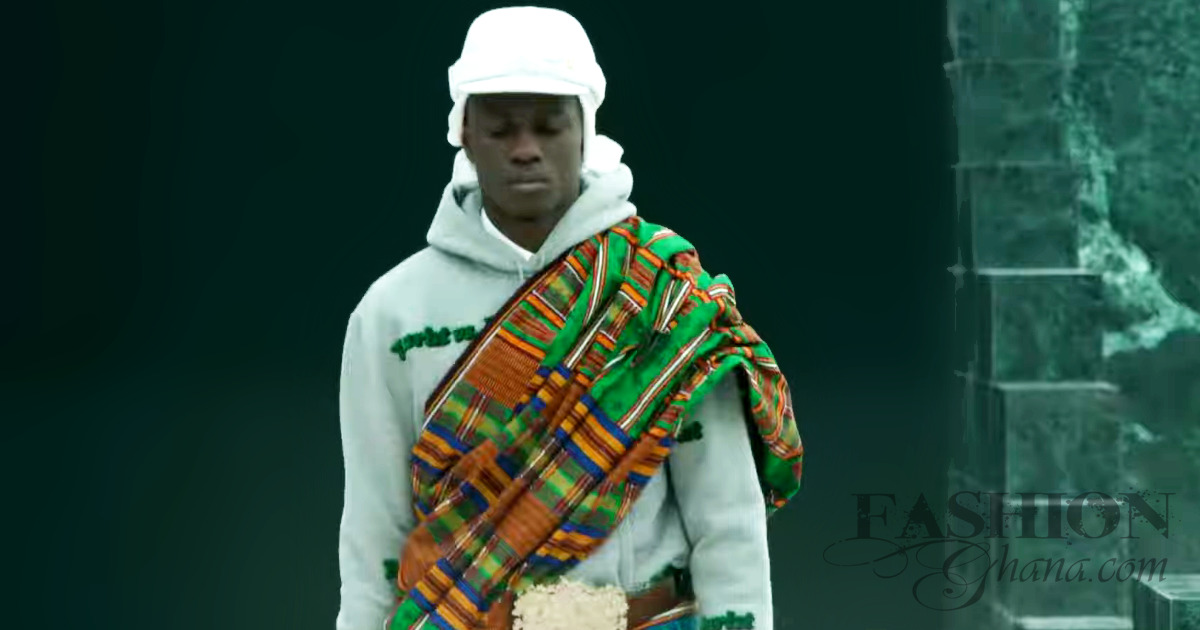 The head brand to the LVMH company just streamed it’s Mens Fall-Winter 2021 Fashion show Collection by Virgil Abloh in Paris on January, 21st, no more than 2 hours ago live on youtube.

The show was a virtual show very reminiscent of that of German brand Impari Moda’s Accra Fashion Week’s showcase. The show was mixed with the runway, a musical performance, awkward movements, and group dancing.

Black Is Now Cool In The Fashion World

As always the highest ever neglected and degraded social group of the mainstream fashion industry, black people, became the center of attention in their latest show.

Halfway through the show, we have mentions of the names of various African American and international revolutionaries from Malcolm X, Harriet Tubman, Gandi, and more. To even mention the victims of Hiroshima.

A moment in history when America dropped a bomb and killed a large number of Japanese.

What an awkward moment, never would one think all those names struggled only for us to begin buying into white-owned companies owned by rich white men that have turned a blind eye to the struggle.

The LVMH embracement of black culture is nothing but a marketing and financial plot in an overturn of reality where black people are taking more pride in supporting their own brands.

So in other words we are looking at attempts to cut off this growing love for support your own by selling to you.

LVMH even goes as far as having politically charged and conscious rapper Mos Def rap a whole song through their virtual show.

It seems the companies that, once upon a time, denied using black models for fashion such as Vogue and friends, are now desperate to maintain their black clientelle in the age of social media where they are now capable of connecting with their own brands.

To the young ones, these pro-black antics may seem cool, but to the elderly and fashion-conscious amongst us, this is almost hilarious and hypocritical. Almost as one was watching the last action of a desperate dying entity.

Louis Vuitton Goes Back To Africa

Well if you think calling out all the names of random revolutionaries and a performance by Mos Def isn’t black enough, then this might entice you.

The 3rd to the last look sees a model wrapped in Louis Vuitton Kente.

Valentino Goes African Masai For 2016; Read This Before You Cry Cultural Misappropriation

Our concern is how the turn of events created by social media and the rise for us to support our own has new driving such brands to start marketing towards us.

The Rise Of Black Independent Fashion At Risk

The latter years of fashion up to 2021 have been very good for black businesses, the rise of cultural renovations like by Black Panther, Beyonce’s ‘Gift’, the increasing push of Afro Beats is putting black and African culture at the center of the world, all due to independent strengths online.

Mainstream fashion companies such as Louis Vuitton that did everything in their earlier days to keep themselves purely white are now doing everything to get a piece of the black love pie. It’s the central reason why individuals like Virgil Abloh was hired in the first place.

Louis Vuitton Or Your Community

This is not any appreciation for black people or black culture, it is simply business! Business to intersect a growing market.

If tomorrow the Chinese people become the cool of the Earth and the trendsetters, you can kiss Mos Def, Malcom X and Harriet Tubman goodbye on their shows.

A New Meaning To Put Your Money Where Your Mouth Is

The best thing to do is to keep your money where it belongs, in your community. Unless obviously you admire the looks and wish to get them, then you have the freedom to do so.

With that said, let’s not underlook the fact that lack of support of our own business is directly correlated to poverty, crime, and more in our communities. Let’s bear that in mind when Louis Vuitton spews names of black activities to sell us garments.