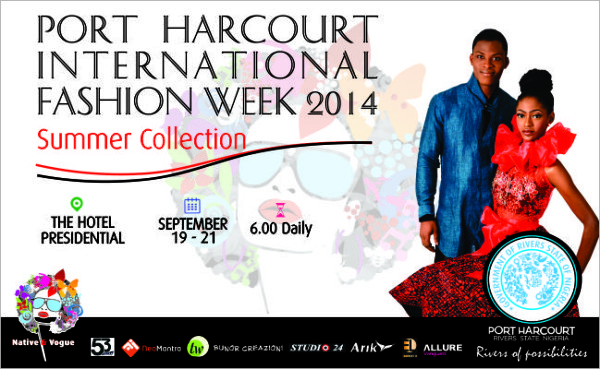 Following the success of the maiden edition of the Port Harcourt International Fashion Week – Native & Vogue, last year, the Rivers State government has announced that plans are in top gear for the second edition of the fashion event this year from September 19-21.

Briefing the media recently, the Rivers State Commissioner for Information, Mrs Ibim Semenitari, said that this year’s event promises to be bigger and better.

According to her, “Fashion continued to remain an avenue through which people can, not only express themselves, but also become successful entrepreneur and employers of labour.”

Hence she said the “essence of Native & Vogue is to direct the minds of our young people to the vast potential available in the fashion industry. We want to open doors of opportunity for our younger ones. It is also a better way to brand the state by associating with beauty, which is why Rivers State government is supporting Native & Vogue.”

Semenitari said some international models would be coming from South Africa and other parts of the world.

Her words: “We are expecting about 80 models to work with designers from South Africa, UK and other countries. Models will also come from South Africa and our own ace designer, Frank Oshodi, will be here, too, to coordinate everything.

“We encourage young designers to key into this opportunity. Port Harcourt is set to host distinguished guests from the international fashion scene during this three-day programme, which promises to be a spectacle and an awesome display of the vibrant Nigerian and African fashion style. This we believe, will largely reduce unemployment and youths redundancy,” she said.

Native & Vogue has been designed as a dual platform to groom emerging designers and showcase the established ones. It is an event positioned to drive and grow the local fashion industry into sustainable globally competitive brands.

Giving details on what to expect from the 2014 event, Managing Director of Neo Mantra, partners of the Rivers State government on the project, Nkiru Oguadinma, said international models would be coming from South Africa, United Kingdom and Canada to spice up the event.

According to her “international models, about 10 of them, would be coming from South Africa, UK and Canada to Port Harcourt to complement the people we already have here in Nigeria. So, we will like the up and coming, even the young models here to also interact with them to also see how long they can go on the runway.

“We are also expecting about eight designers from outside the country. Designers like Mudi Africa, Ade Adebayo from UK, Yomi Kosiba as well will be here,” she said.