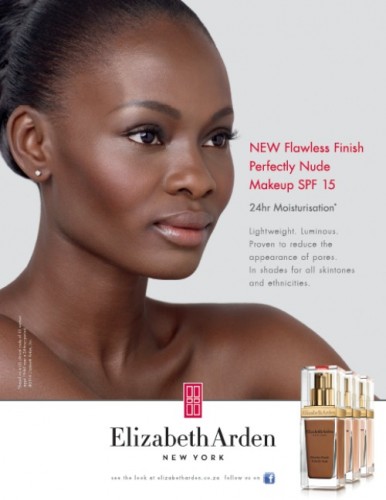 DIFFERENT is the new black. This is the message model Adeola Ariyo has for all the women who are unhappy with their quirky features. Whether it’s freckles, wide-set eyes, or very dark skin, people must learn to love what sets them apart from everyone else, says Ariyo.

Nigerian-born Ariyo, 28, works in the fashion landscape of Cape Town and London. When she was 13, she was spotted by model scouts in the streets of London, where she lived with her father Akin. “I was an athlete at school. I was a tomboy, so I must have been wearing trainers and jeans,” she recalls.

She signed up with an agency and modelled for two years before returning to Nigeria to complete high school. The plan was simple: To go back to London to study law but in 2005, she was among the top five in the Nokia Face of Africa modelling competition. She then had the daunting task of telling her father she wouldn’t be going to university just yet. Instead, she would move to and work in Cape Town.

For a long time, he didn’t understand why she wanted to be a model. He wanted her to get a proper job and earn proper money. They eventually compromised: she would carry on modelling and study through Unisa. She obtained a degree in psychology last year.

Even though she had recognition through Face of Africa, it was hard to break into the industry. There wasn’t that big a demand for “normal-looking” black models.

At the time, Ariyo says, when clients asked for African models, they meant those with features like South Sudanese Alek Wek or mixed-race models. “As a black Nigerian with a ‘normal’ look, I wondered when it would be our turn,” says Ariyo. The answer came five months ago, when she became Elizabeth Arden’s brand ambassador for Africa.

At the end of the month, she’s off to New York to pursue her lifelong dream of participating in New York Fashion Week. She says one can never really predict what it is the designers will want from their models, and you only get one shot.

One thing is certain: the industry is a lot more strict in New York, Milan and Paris than it is in South Africa. Ariyo, referring to the oft criticised requests for superskinny models in Europe, says they get away with a lot more here.

Ariyo is one of the lucky ones. She’s able to eat healthily – pasta being her favourite food. Because she’s always been athletic, she starts bulking up when she exercises. So she stays away from the gym.

When she casts for the European market, she has to lose a bit more weight, so that her cheekbones and other features are more pronounced. This is one of the reasons she chose to live and work in Cape Town. “If you’re not happy, find a market that suits you. That’s why I’m here. In South Africa, we can look normal,” she says.

Ariyo notes the market is slowly opening up to black women with different looks. They’re slowly moving from the runway and on to full campaigns. But it’s hard work. During a campaign, she could easily be on eight flights a week.

She’d wake up at 2am, be on set by 4am, have make-up and hair done by 5am, then look sunny and bright for the cameras. While there are models who do that constantly, Ariyo says when she’s exhausted, she stops to take care of her body.

Ariyo hopes to see more black women on the covers of fashion magazines – without their being digitally lightened. She has been lightened before, and when it has happened, she has spoken out against it. “If you don’t speak out against it, it keeps going on,” she says.

Being a brand ambassador and having her profile raised has provided the perfect platform to give voice to several concerns about the industry she’s in. She has a lot of teenage followers and she encourages them to love themselves. “A lot of girls bleach their skin. That’s something you can’t undo. I tell them that once you appreciate yourself, others will too. “People are meant to be different. And different is the new black.”