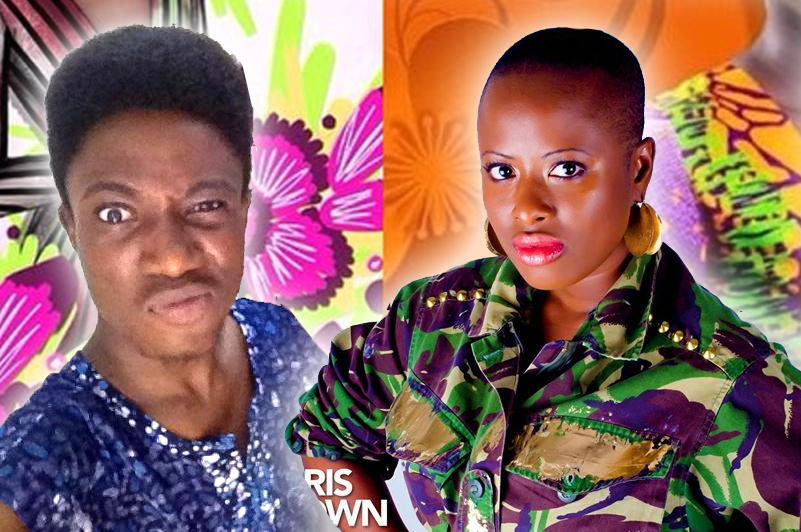 To make it clear ‘From our understanding’, It started when young illustrator Papa Oppong took to Instagram and posted the picture below…. 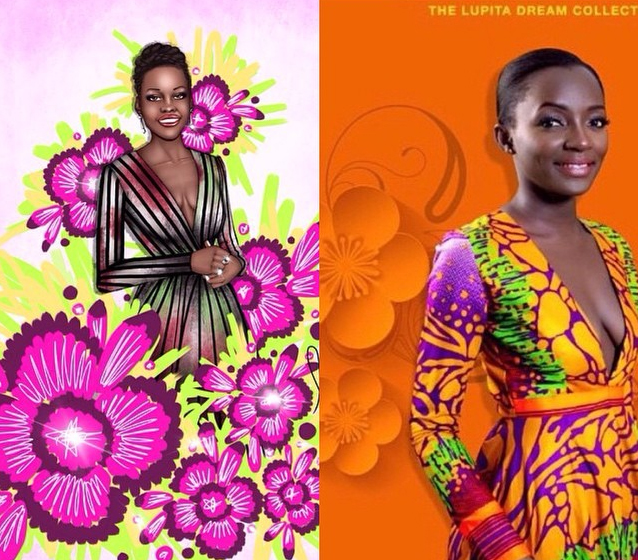 The picture on the left is his illustration of Lupita entitled “Lupita’s Bloom” and then to the right is one of the campaign/billboard images of the Lupita Dream collection by Printex mimicking various designs worn by Lupita but with print as seen here. The collection held various designs with various backgrounds. On the picture, Papa Oppong the illustrator made the caption which can be seen here…..

“Ok I think it’s time to address this issue. For the many people who meet and ask me/congratulate me/speak to me about the latest #Printex (fabric company) campaign: NO. I was not creatively involved in the campaign. No one from Printex ever contacted me concerning my “Lupita’s Bloom” illustration for a collaboration or concept. All new to me as well. I guess this is why so many young talented individuals fear putting their work online…still have to do what you have to do 🙂”

Which can be seen via this link https://instagram.com/p/4ZrZrgHjVs/?taken-by=papaoppong

THe conversation furthered with Papa’s followers criticizing Printex. Vickie Remoe, head of Marketting at Printex sees it and replies on the instagram picture. “I don’t even have time for this. So what you’re contending is that the campaign stole your idea? An artist just like you developed the artwork for the collection which was inspired by themes “dream” and “wanderlust”. If we were able to pay an artist for this campaign why would we not equally approach you and compensate you for your work? I for one never saw your illustration nor did I ever her of it. That’s the thing sometimes we are so immersed in our own world we assume the world has eyes on us. Meanwhile they haven’t a clue. If you would like to discuss the idea and concepts behind this campaign pls contact our very abled Creative Graphic Arts colleague @DavidNarh who developed the campaign. Seriously ain’t nobody got time for this.”

Which seemed like a reasonable reply. However, since then their public dispute has blossomed to snap shots of discussing on facebook and further replies. The most shocking part about this dispute, is initially one would think they are at each other over some serious plagiarism.

In all cases, a lady of Vickie Remoe status could have possibly taken it behind the scenes with an explanation and requested Papa takes down the image, but that is the only critique one could share on her part and it applies to both.

Papa Oppong, on the other hand, may be an amazing illustrator and had his work shared by a good number of celebrities, but the truth is he doesn’t have a trademark on flowers, nor flower patterns. If one is to google floral background you will see over 100s of resembling images, where as the only similarity between this illustration is that flowers are in the background.

Even if Printex was inspired by his concept of floral designs, which I can’t make the connection, Printex is still in every right to use it the way they did, because again, he hasn’t got a trademark on floral designs, he only has a copyright on what he publishes. It might be a different case of similar flower colors or flower counts, or flower style.

In addition, it’s advisable for up and coming young talents, that if you wish to move yourself forward to not take to public every disgruntle you have to public. Especially when it’s borderline plagiarism that can’t be proven neither and then disguising it as if you are replying to people’s concerns.

The only person who should be showing any distraught from this is Elie Saab, the original designer of the dress. This seems like a dispute that shouldn’t have been made public. On that note, congratulation to Papa Oppong for a great collection displayed at Radford University Graduation Day.