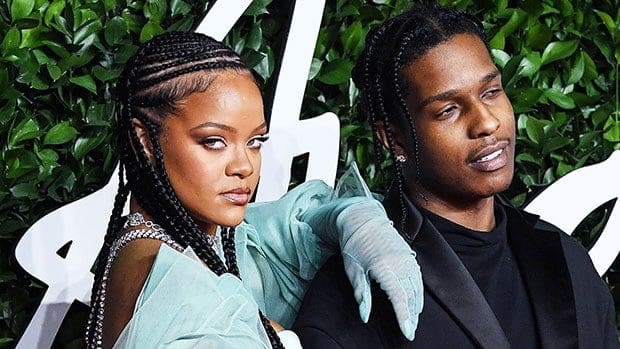 The news comes two weeks after another insider told Us that the “F–kin’ Problems” rapper, 31, “has always thought Rihanna was cool and gorgeous” but never crossed the line because they were “very close friends” for many years.

The “Love on the Brain” singer, also 31, and Rocky (real name Rakim Mayers) sparked romance rumors in December 2019 when they posed together on the red carpet at The Fashion Awards at Royal Albert Hall in London. They later spent New Year’s Eve together with friends at the Edition hotel in New York City.

Additionally, in mid-January, Rihanna supported the Grammy nominee at his Yams Day Benefit concert in Brooklyn, where she also hung out with her ex-boyfriend Drake in the audience.

The Fenty Beauty founder most recently dated Hassan Jameel. Us broke the news of her split from the Saudi businessman, 31, in January, nearly three years after they were first linked.

Prior to Jameel, Rihanna was in a relationship with Chris Brown, who pleaded guilty to assaulting her in 2009. She later dated Drake, 33, on and off until 2016.

The Barbados native told Vogue in 2018 that she no longer had “a friendship” with the “In My Feelings” rapper, and he unfollowed her on Instagram days after the magazine published the interview. However, they reunited at his birthday party in October 2019.

Jameel, for his part, was married to art critic Lina Lazaar from 2012 to 2017. Rocky, meanwhile, was linked to Kendall Jenner from 2016 to 2017, though a source previously told Us that the musician and the Keeping Up With the Kardashians star, 24, “weren’t really official.”