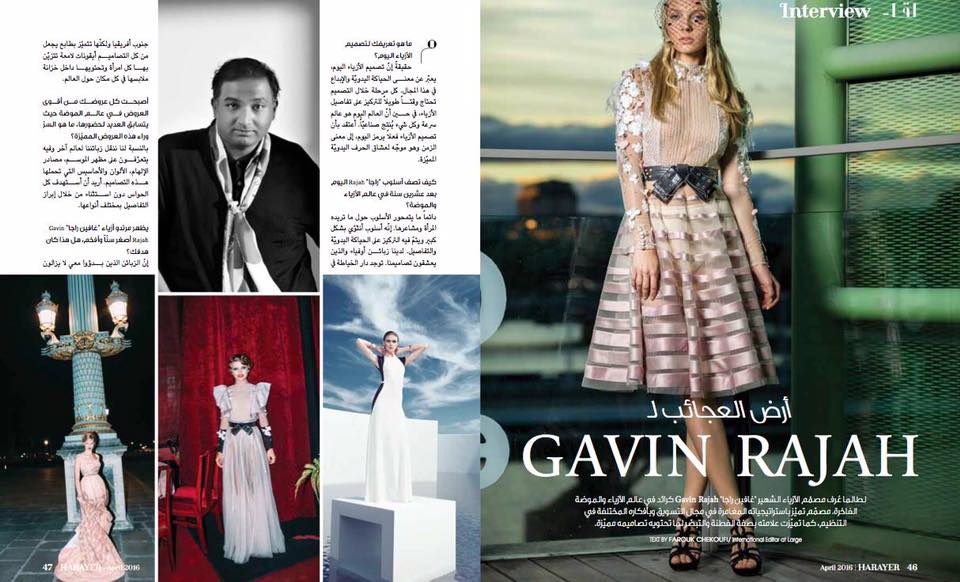 Gavin Rajah has landed himself in another ‘whose dress is this controversy’. As some may know he was called out in previous years for copying designs by other known designers abroad. Although he responded to a couple of the claims and clarifying who was behing it, it seems the stigma had already been branded.

This case is slightly a little different, to make it clear, the SA designer Gavin Rajah is not being accused of copycatting a design, but instead he is under fire for using images New York based designer Chelsea Liu claims is hers. The images were used in a recent interview by English-Arabic magazine, Harayer, with Gavin.

In the first post by Chelsea Liu, dated 14 April, Liu posted a screenshots from the magazine saying the dresses featured in the article on Rajah are actually Liu’s own original designs and stated this…..

“Oh my god. What a shame! South Africa designer Gavin Rajah stole my pictures and my designs for his interview. I don’t know why this magazine doesn’t check their sources! Feel free to sue me. I m ready to play. You are ready to play. Let s play (sic),” Liu said along with the first post.” 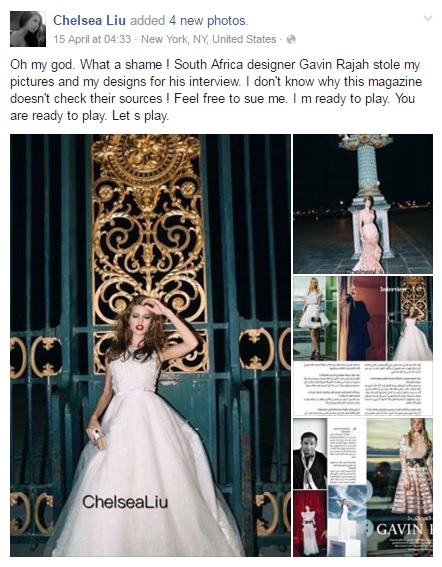 However things escalated when Chelsea Liu posted another facebook post. This time including an email sent by what could possibly Gavin Rajah himself. In this said email Gavin Rajah threatens the designer to take action upon her legal stay in USA if the image is not removed. He stated….

“Hi Marc, I am writing this email only as a courtesy. In fact I write this out of respect for you. Should Chelsea not remove all her malicious posts on Facebook we intend sending an urgent application the the US Citizenship and Immgration Service via the US Consulate by our attorney today in SA illustrating our intent to pursue damages and a charge of cyber bullying. The implications for green card holders and individuals not naturalised in the US are dire, given this behaviour, I am sure you are aware of. She has until 14h00 SA time to remove this.” 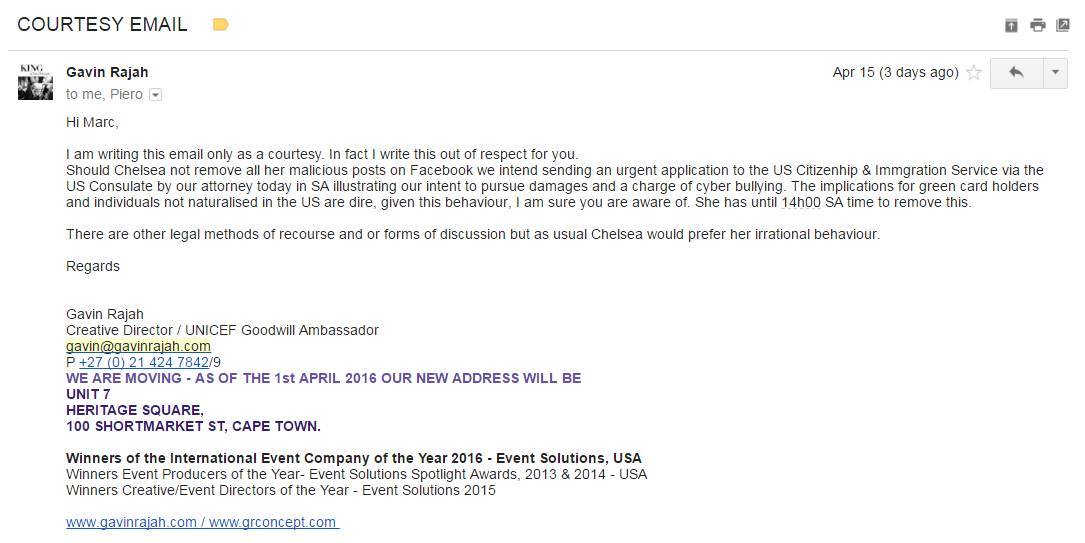 In the second post Chelsea stated “this is really too far !!! South Africa designer Gavin Rajah privately threatened my family by saying his lawyers would try to take away my US green card !so complaining about Gavin Rajah stealing my designs means i am a cyberbully? This is what Gavin does when you cross him.He tried to break up your family! what exactly will the lawyers say ? ” Chelsea is bullying Gavin ! cancel her green card and kick her out of the US!!” 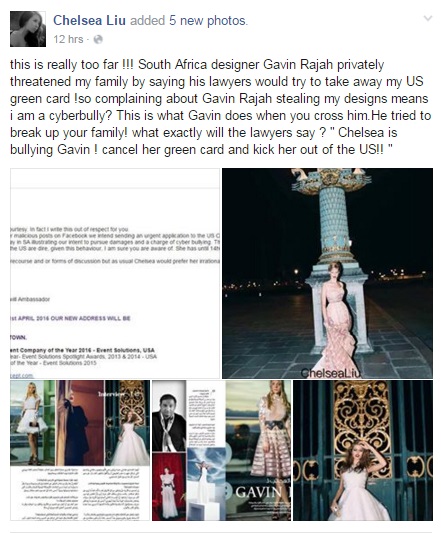 Apparantly Liu has worked with Rajah in the past, according to Women Online, as she launched an exclusive bridal line in partnership with Rajah in June 2015.

We are yet to see where and how far this will go. However, despite Gavin being one of our most appreciated designers in South Africa, he and his team would need to sit down and calculate why controversy follows him and work to stay out of it for atleast five years.

These accusations are surely not great for the brand, and even if they do not have direct effects on the Gavin Rajah brands, they may just pave the way for the act that could.