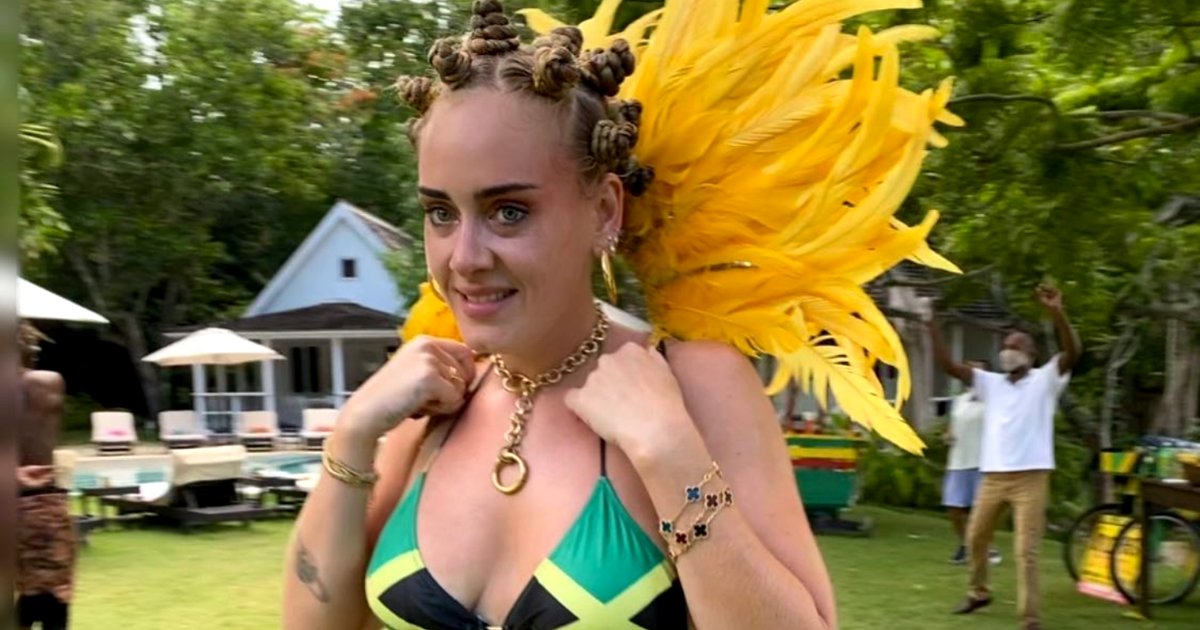 Musical sensation Adele decided to be a part of the Notting Hill Carnival virtually. She took to instagram to post a picture of herself with Bantu Knots and a Jamaican flag bikini top. In case you need to be enlightened about Bantu Knots, see below.

Trending: Bantu Knots Are Kicking In, See Styles & How It Started (Pictured Rihanna)

She captioned the image “Happy what would be Notting Hill Carnival my beloved London,” the English singer wrote in her caption, referring to the second largest carnival in the world, which usually takes place around this time in the streets of west London. The event which celebrates Caribbean culture and interracial tolerance would have taken place August 30 and 31, but is entirely virtual this year because of the coronavirus pandemic.

As stunning as she was (well not so stunning, but quite stunning), she caused a major stir on social media Sunday after posting a picture of herself on Instagram with an African orientated hairdo.

The singer was quickly accused of cultural appropriation by some users for the hairstyle and top, which seemingly makes no sense. Adele is not running a business of bantu knots, she is simply wearing a hairdo, and not just randomly (which is not a problem on its own) but even doing so an ode to a Caribbean celebration fest of interracial tolerance. That is far from cultural appropriation.

At times one must wonder if the mainstream media are looking for headlines by picking a few comments or if there really is a social media outrage. When it comes to cultural appropriation and hair, I don’t think it is appropriate at this time in history that black women will be offended by others wearing what is natural to us, considering the state of the weave culture amongst us.

Yes, that doesn’t come with a political and economical and psychological contradiction, considering what most young black girls are fed through in media and the many workplaces and schools that make it difficult for us to be natural. But let’s not deny there should be more natural hair effort on our part prior to taking Adele as an issue. Hence why this outrage could possibly be made up.

If one wants to take Adele on for cultural appropriation, it should be with the black soul music that she has been crowned for that feeds 100s of (most likely) white staff members and employees, as opposed to simply wearing a hairdo.