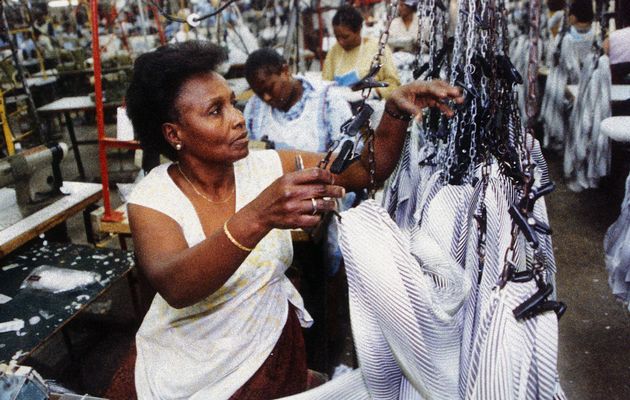 South Africa Set To Produce Clothing For The USA

US REPRESENTATIVES at the Source Africa trade event last week were adamant local apparel manufacturers could sew up a viable patch for the US market.

This should offer some encouragement to local clothing and textile manufacturers, whose profit margins continue to be eroded by the steady influx of cheaper imports from mainly the Far East.

The view from US trade representatives coincides with a period of considerable weakness in the rand/dollar exchange rate and continuing negotiations to extend the African Growth and Opportunities Act (Agoa).

But cracking the US market is no cinch. US trade representatives warned that South African textile and apparel manufacturers not only lacked a presence in the US, but would need to keep up with the speed of US consumers’ demand to benefit meaningfully from a renewed trade agreement.

“SA is sitting with untapped potential and can definitely have a better footprint with its textile and apparel in the US…. The industry is definitely not doing enough,” said Rosa Whitaker, trade expert and a US trade representative in the Clinton and Bush administrations.

Gail Strickler, from the office of the US trade representatives, believed sub-Saharan African countries needed to integrate to create a valuable supply chain.

Agoa gives eligible countries across Africa duty-free trade access to the US market. Over the years, apparel has become one of the top exports under Agoa.

Lesotho ranks tops in southern Africa in terms of volumes and quality of jeans and shirts supplied.

US representatives said African countries that worked together could set up a full supply chain that would create long-term investments and job creation out of the 10-year Agoa agreements.

“Agoa is an opportunity and not a guarantee. While still addressing infrastructural and legislative issues, countries need to work together. To overcome the time-to-market speed element, SA can focus on things that are not time sensitive,” said Ms Whitaker.

Yet experts are adamant there is a gap for local manufacturers as China cannot keep up with the demand from the US millennial generation, so apparel has to come from other sustainable sources.

She said sourcing from Africa avoided the “brand-damaging reputational issues” of sweatshops and child trafficking associated with Asia. “This makes the Africa apparel brand appealing to the emerging US consumer generation.”

But Johann Baard, executive director at Apparel Manufactures of South Africa, said that given SA’s socioeconomic realities, the industry could not be obsessed with speed and align its supply chains to meet US standards for apparel demand. “We are more concerned about job-rich industrialisation that is sustainable.”

Economic Development Minister Ebrahim Patel said the sector was only beginning to reap the benefits of government interventions (such as the Clothing and Textile Competitiveness Improvement Programme introduced in 2010) to insulate the industry against the influx of Chinese imports.

“The industry is beginning to see an increase in jobs. It is still in a fragile but stable state.”

Mr Baard, however, urged caution over job creation statistics, noting that not all clothing manufacture operations were compliant with the minimum service and wages that are negotiated with unions and statutory bodies.

“Yes, there has been a growth in jobs but it has been outside the metro urban areas where factories employ people in poverty-ridden areas and pay them a third to a quarter of the regulatory wage.”

Mr Baard said this had led to wage-compliant factories retrenching workers and business eventually rerouting to noncompliant factories. “There is no sustainable imperative to have an industry growing in one area at the expense of other areas … the reality is that the retailer will support companies where they can get good returns from.”