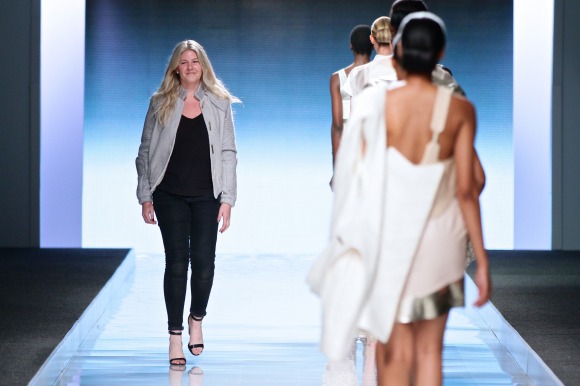 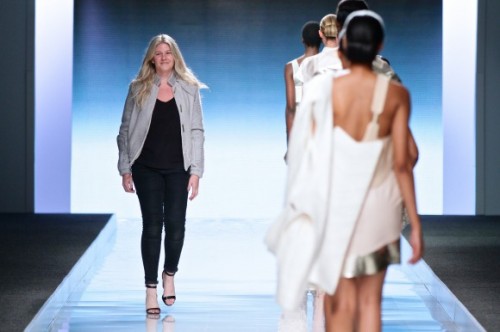 Tamara Cherie Dyson from current World Design Capital Cape Town is the lucky young designer to be hitching her dreams to a star this year as she celebrates winning the ELLE Rising Star Design Award 2014, in association with MRP and presented by African Fashion International (AFI).

Dyson follows in the footsteps of SA fashion luminaries such as David Tlale, who has gone from Rising Star Design Award winner to acclaimed international designer, showing his ranges at New York Fashion Week and beyond.

Entrants were invited to reflect their own design aesthetic in their ranges, says judge and ELLE South Africa editor Emilie Gambade.

‘Tamara stood out among the finalists for her flair in interpreting contemporary and historical international trends,’ says Gambade. ‘She delivered her own vision of clean sharp lines softened by the use of luxurious fabrics.

‘There’s a very modern edge to the looks she presents, complemented by classic finishes and fascinating detail. We look forward to seeing Tamara’s talent blossom.’

MRP trend director and Rising Star judge Joanne Frédéric says, ‘Tamara blew us away with her refined and sophisticated collection. Her innovation in developing fabrics locally was definitely a stand out element for us. Her solid and well thought through business plan set Tamara apart. Tamara will no doubt show the global market what African design talent is all about.

‘Taking part in the ELLE Rising Star Design Award has been an awesome experience,’ says Dyson. ‘It’s also been fascinating to see the wonderful designs of my fellow finalists.

‘I’m thrilled the judges‎ have given their seal of approval to my luxury minimalist approach – I love balancing the discreet indulgence of silk and fine fabrics with more structured heavy weight fabrics. I’m really looking forward to taking my skills to the next level working further with ELLE, MRP and AFI over the coming year. I hope to maximise every opportunity.’

As judges, we’re quite confident Tamara will do exactly that,’ says Thebe Ikalafeng. ‘Tamara is the most ready young designer I’ve ever met – ready to go to market and ready to compete with anyone in the world.

‘A star has definitely arrived. Her global aesthetic is spectacular. Her finish is unrivalled and for her business plan she put in at least three times as much effort as anyone else. Attention to detail ran through every aspect of her entry.’ Ideally, as the competition progresses, we’d like to see designs that celebrate Africa and the uniqueness of its beauty, as well as entrants who represent the diversity of Africa’s people in the future competition.

‘They must be able to carry right through from concept to storyboard to making up and showing the range,’ she says. ‘We know that South Africans put a high priority on keeping up to date with fashion trends and looking good – but we also know consumers are very discerning, making this a highly competitive market.

‘That’s why the ELLE Rising Star Design Award is more than recognition of talent. It also offers invaluable mentoring to help our winners capitalise on their talent.’

Over and above a cash prize of R30 000 thanks to MRP, Dyson also wins top-flight mentorships. She will spend two weeks each at the ELLE South Africa office and at the MRP head office.

‘During her time with us at ELLE, Tamara will gain insight into how we make and implement decisions that create our fashion editorial – in other words, how we interpret trends and how garments come to be featured in our spreads,’ says Wertheim Aymés.

At MRP, Tamara will be exposed to the full retail cycle and also face the challenge of redesigning a predetermined range to be sold in selected MRP stores. Finally, after participating in the AFI Next Generation programme, AFI’s young designer development initiative, Dyson will show a spring/summer collection. In addition, she will receive R7 000 from MRP to help produce a range to feature at the 2015 ELLE Rising Star Design Awards.

‘We have been thrilled this year to receive entries from outside South Africa and we’re looking forward to driving this inclusivity further next year and into the future,’ says Ikalafeng. ‘We’ll be fascinated to see design that celebrates Africa and the uniqueness of its beauty, as well as entrants who represent our diversity.’

‘The dynamic fashion flair of Africa’s designers and age-old influences have been highlighted at the international collections this year,’ says Wertheim Aymés. ‘With the ELLE Rising Star Award, we and our partners are determined to do what we can to make Africa’s voice resound as a constant, joyful contribution to the international fashion scene.’ 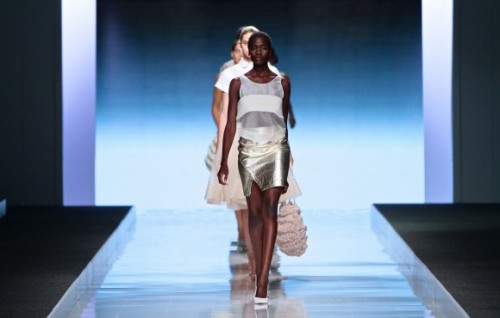