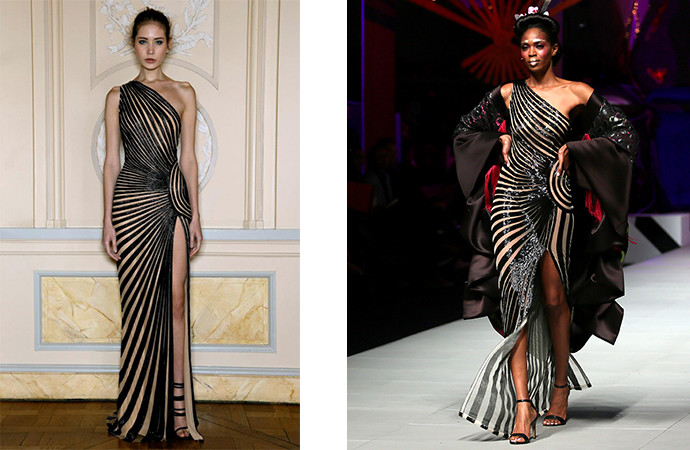 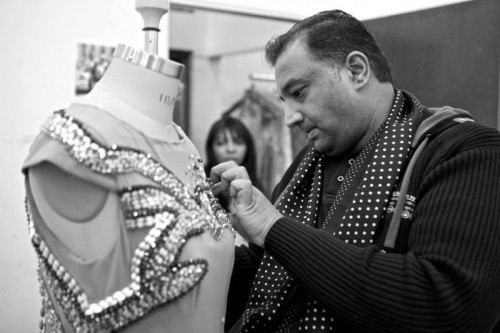 We would like to say we have received updates on this issue, a little evidence shows that Gavin’s dress had existed prior to the two below. We will have it updated as soon as we can fully confirm.

One of our favourites from South Africa’s and one of the countries most popular and controversial designers, Gavin Rajah, has been accused of stealing the fashion style/creativity of a dress belonging to Han Chong. The designer who recently revealed his Autumn/Winter ’15 Resort Collection at the Mercedes-Benz Fashion Week Johannesburg 2015, blew us away with astonishing designs as well as amazing swimwear outfit.

African Fashion International (AFI) says was inspired by “memories of bygone events, romances that were, the free-spirited lifestyle of the 1970’s and the music of Claudine Longet”. However, shortly after a buzz grew in the industry with many claiming that one of the pieces which was a mid-calf-length lace number, is in fact an exact copy of a dress created by UK designer Han Chong. See it for yourself below.

People talking about the controversy on social media were unsure as to who copied whom, until a photo of Reese Witherspoon wearing the Chong’s dress in 2014 popped up. Gavin has also been a master behind many outstanding and mind blowing dresses, so we are mindful that until his position is publisized we can only speculate.

Despite our admiration here at FashionGHANA.com for the designer Gavin Rajah, one can not deny the similarities and how with the exception of color, the dresses are almost identical. Could this potentially be a coincidence? Inspiration? Team work? Or outright plagiarism? And if it is, who copied who? What accountability is there for susch actions in the fashion world.

Could this possibly be a controversial pr stunt? If so it sure is working, because the design wasn’t the only wow dress amongst Gavin’s collection at Mercedes Benz Fashion Week Joburg 2015. However, it doesn’t seem to great when he already has face a similar controversy.

Last year, Gavin faced the same turmoil when he displayed a dress literally identical to that of Lebanese designer Zuhair Murad as seen below. 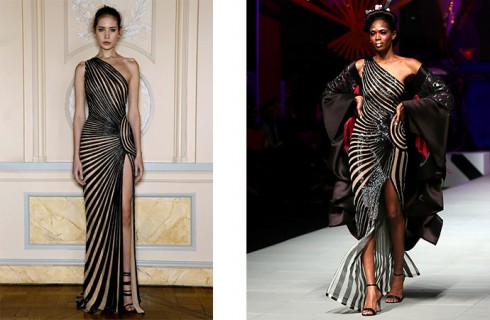 What the media did not report about the dress above is that it had been created by Gavin Rajah in 2007, so could it be a question of who hit the runway first. And could there be a third option next to inspiration and/or plagurism, such as coincidence? A picture below is taken from NYs Nakeem Khan’s 2015 resort collection which mimics. Is this also copying? Or is this just the norm of fashion and the creative people.

Gavin has an extensive amount of fabulous outfits, the reality is his brand would be just as strong with or without these designs. But it will sure be frustrating to fashion designers to see similar ideas of yours in other collections. We will continue to keep you updated on this.

Very interesting, what is to say they didn’t copy Gavin Rajah. We cant assume because we see something abroad that we copied. The west has been copying designs in Africa for centuries.

I honestly think that most, if not all designers have copied or get their inspiration from somewhere, be it from the 60’s, 70’s, 80’s you name them. No fashion design work is totally original in my opinion.