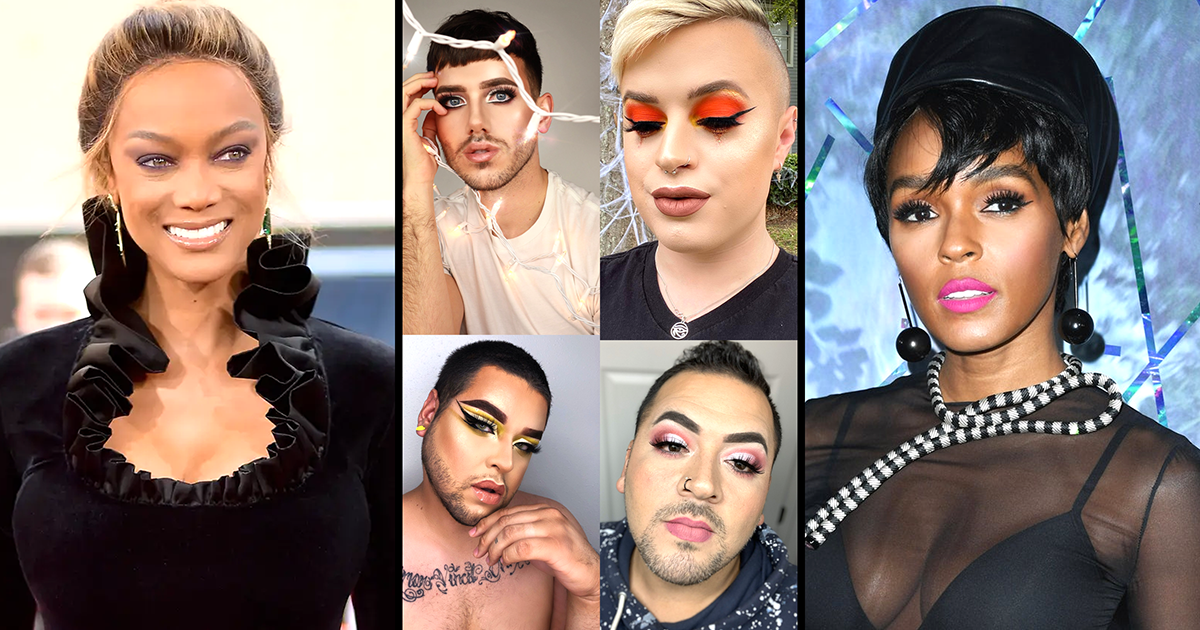 Tyra Banks took to twitter to retweet Janelle Monae’s call for men to start wearing Eye liners. The America’s Next Top Model star panelist sometimes forgets she’s in the real world and not a TV show. In reply to Janelle Monae’s tweet that stated “Kings , put on a little eyeliner .” she tweeted “I think it’s extremely unfair women can enhance their beauty with makeup while it’s not widely accepted for men to do so.”

I think it’s extremely unfair women can enhance their beauty with makeup while it’s not widely accepted for men to do so. #GuyLiner https://t.co/IZJgLf3zIY

Sometimes it’s hard to figure out if the gender invisibility behavior by celebrities is genuine or a pretentious characteristic all in the glory of building their fan base. Yes we want gender equality, but gender equality means equal opportunities for all genders not gender behavioral stupidity. Why doesn’t one ask the question why she doesn’t grow a mustache with a beard. If she wants gender equality so much why isn’t she married to or having babies with camp men who flick their wrists at her jokes and love the sight of male genitalia. Why do they force such acts on society without doing so on themselves.

Yes we know her for wanting to break boundaries and encourage people to step out of the norm. Yes we know her for telling transvestite models they can be top models, but there are actions that throw all your hardwork under the bus because it comes off as fake. No man has ever said I want to wear make up but I am scared of society.

For years Tyra Banks has been encouraging people to love themselves and their beauty as they are, so at which point does it make sense for her to request guys to wear make up? Surely she should be taking a leaf out of the guys books and encouraging women instead to stop wearing make up. But then that’s how you know it’s fake. She should be challenging society to be more welcoming towards women who wish to not always be glammed up as models and build their confidence.

Janelle Monae on the other hand who is a lesbian is using her platform to encourage attributes of homosexuality. But in all seriousness if you are not on the other end of a movie role or facially damaged there is no reason for a man to be wearing make up other than overtly admiring women and trying to be one. And by no reason we don’t mean culturally, we mean practically! What is there for a man to wake up and say, Oh My God, if i don’t wear make up today….this or that will go wrong? or this woman won’t like it, or my work place with react, or so and so? No reason at all, unless you are trying to expose your gay sexuality to another man.

What Janelle Monae and some other gay people don’t understand is that, it is them that take the steps that make non gays uncomfortable around homosexuals. If a celebrity that was straight took to their twitter and said cross dressers should stop wearing womens clothes at times, there will be an uproar, so why do the same people do the alternative and consistently pound on encouraging non gays to embrace attributes of homosexuals.

Many homosexuals will like to believe that non gay men are repulsed by them, or maybe they just act that way to garner sympathy, but the truth is some just find you irritating when you treat your sexuality as a contagious disease that you feel obliged to spread. No one has put a rope around any mans neck and requested they shouldn’t wear eye liners and a lot of, even some that aren’t gay, its a general choice! We don’t do it because we don’t find the beacon of our attractiveness based on standing by the mirror and perfectly drawing a black line around our eyes. We find our attractiveness based on having all the fabulous means to take care of our families and women. From wealth, to strength to associates. Being well groomed, smart and caring and throwing in some humour in there every now and then.

Any woman that needs a man to wear eyeliners to be attracted to them is an issue she needs to take up upon herself. We all respect freedom, but the biasedness of these people in power for the search of more followers from the LGQBT or what ever, can get tedious at times. Even men are fairly tired of issues caused by women wearing make up. In fact a good number of men would be more than glad if they women didn’t wear it, let alone having to sit and think how they will embrace it. The only men excited about make up are those that run companies selling them. All others are most likely homosexuals trying to enhance their features to attract other gay men because….its a homosexual attribute (generally speaking), if you don’t believe, here are those that replied to Tyra Banks request.

How ‘bout a little more than a little liner? 😂❤️💋 pic.twitter.com/LKG4z7COZx