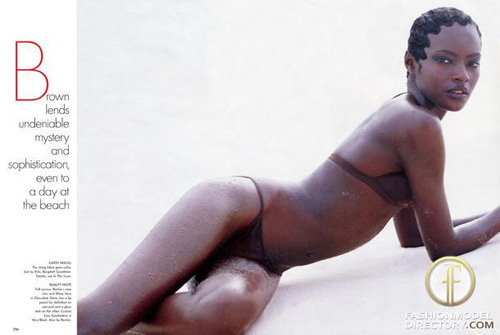 When a model is having a comeback, it usually means she has dyed her hair or cut it, or she has taken a season off to have a baby. Kiara Kabukuru’s story, however, is a bit more dramatic. Kabukuru had already lived through much more than your average model long before she ever stepped in front of a camera, having escaped Uganda in early childhood as a political refugee. In the late ’90s, she was one of the top names in the industry, appearing in campaigns for Gucci, Chanel, and Calvin Klein, walking the runway for Dior Couture, and landing the Pirelli calendar and the cover of Vogue. Then, in 2000, she was run over by a semitruck in New York and vanished from the glossy pages where she had made her mark. Now, more than a decade later, at 37, Kabukuru has pieced her life back together and is poised to make what can truly be called a comeback.

On a wintry day in November, Kabukuru, who is lithe and fine-boned and has an almost incandescent effect of being lit from within, was curled up in a chair in her Greenwich Village apartment in New York, wearing a bright red top, leggings, and sheepskin slippers. “You know,” she said, “my name’s not really Kiara. It’s Alice.”
When she first started modeling, she explained, her agent at Ford thought she needed to come across as more “exotic,” like Iman. Kita? Kina? She had babysat for a girl named Chiara and liked the name. Her agent decided to spell it with a K. “It really was this persona,” Kabukuru said. “And still is. It’s confusing, because I stopped modeling for so long, and since I never gave up my own name, everybody started calling me Alice again. It took Gisele”—Bündchen, one of her closest friends—“years to call me Alice, because she met me as Kiara.”

It’s hard to imagine anyone thinking that Kabukuru needed to be more exotic. She was born in 1975 in Uganda—where her father was “the Donald Trump of Kampala,” the capital city. He was also supporting anti­government rebels and was marked for assassination. In 1980, her parents left the country, and Kabukuru and her three siblings went into hiding with their grandparents. A year later, when she was 6, Amnesty International helped reunite the family in Los Angeles, where she grew up and went to high school.

When Kabukuru was 16, she said, “everybody started telling me that I should be a model.” Everyone, that is, except her parents. “My tribe, the Banyankole, is known for its beauty. And I was skinny, I was boyish, I just didn’t have what they considered beautiful.” Still, in a familiar scenario, one afternoon she was stopped in the Northridge Fashion Center by Bill Bodwell, a commercial photographer who was known for shooting surfers. He was certain the teenager had the makings of a model. Her first booking was for a Coca-Cola commercial. “I had this short little Afro,” Kabukuru said. “The ad said they were looking for the classic all-American beauty, and I thought to myself, Hey!”

The Coke commercial led to her first job in New York, a Levi’s ad shot by Albert Watson. She was sent around to the big design houses. “There was this great response that was unexpected, because I’m small for a model—only five eight and a half,” she said. She met Calvin Klein at his showroom. “Before I even said hello to him, they took me back and put me in camel pants and a camel jacket. He was very sweet to me, and there was this buzz and excitement in the room. I remember just having this feeling that something important was happening.”

Kabukuru lived with Eileen Ford and shared a room with Bridget Hall. One of her first nights out in the city, she ended up in the East Village at Café Tabac, where Christy Turlington, Naomi Campbell, Stephanie Seymour, and Elaine Irwin were all sitting together at a table. “It was such a moment for me,” Kabukuru said. “Like, I’m in New York! With these women! And I’m actually modeling!” 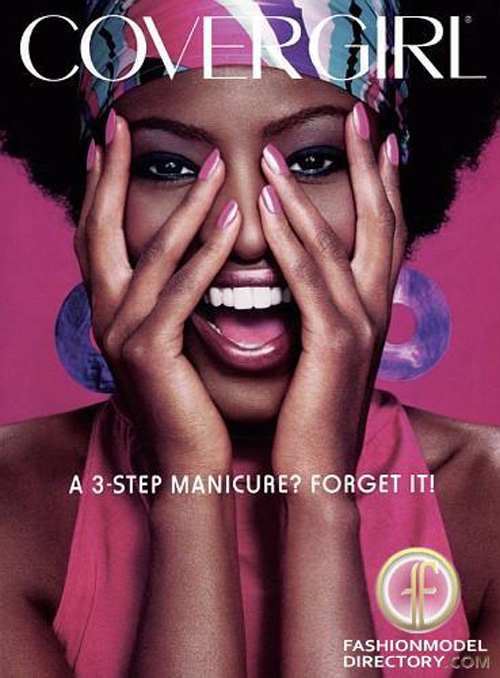 Allure creative director Paul Cavaco, who worked with her on a Mario Testino shoot for Harper’s Bazaar at the time, calls her “one of those rare beauties.” But it was Tom Ford who really pushed her into the spotlight. She excitedly remembered meeting him for the first time, at a Gucci charity show in London: “He walks straight up to me and says, ‘Hi, I’m Tom Ford, and I think you’re great.’ ” After that, she was booked exclusively for the Gucci shows in Milan, and then for the Gucci advertising campaign. “Immediately I could tell: This girl’s got something,” said Orlando Pita, who was the hairstylist on the campaign shoot. “Gisele had that the first time I met her, and Karlie Kloss had that too. They don’t come along often.”

Next she got a L’Oréal contract, then a Vogue cover. She was booked for all the runway shows. “And then,” Kabukuru said, “at the height of it all, I’m about to sign a contract with Covergirl, and I get into the accident.”
It was Memorial Day weekend. Her boyfriend was on his way from London to visit her in New York. She was riding her new bicycle to pick up candles and flowers when, at the corner of Ninth Avenue and 14th Street, an 18-wheel truck manned by an unlicensed driver slammed into her. She was dragged, screaming, along the pavement. When the truck finally stopped, Kabukuru, in shock, started picking up her teeth off the ground. At the hospital, she said, “everybody was looking at me like, ‘Oh, my God.’ And nobody would bring me a mirror.”

The skin on her arms and back had been ripped off. Her jaw, teeth, and gums had to be reconstructed. Her ribs, pelvis, sacrum, pubic bone, and right ankle were broken. She was in a wheelchair for almost two months. “Any movement was excruciating,” she said. “And not being able to bathe or go to the bathroom on my own was devastating.”

In 2003, she moved back to Los Angeles to be with her family. One of her physical therapists recommended Gyrotonic, an exercise method that uses a pulley system to rotate the joints; it was created by a dancer who himself had been injured. Slowly Kabukuru regained her strength and went on to become certified as a Gyrotonic teacher. Meanwhile, she underwent seven separate surgeries to rebuild the structure of her jaw with metal, prosthetic tooth implants, and gum grafts. Miraculously, her skin healed without any visible scarring.

Encouraged, Kabukuru took a few tentative steps back into the modeling world. She signed a new Covergirl contract and appeared in the all-black issue of Vogue Italia in 2008. But she was “still a bit shell-shocked,” she said, and not ready to commit. Instead, she studied acting and helped start a nonprofit, Women for the World, of which she was the vice president. She still owned an apartment in Manhattan, and in 2010 she decided, with trepidation, to return. “I was so freaked out about the city. So it was quite a feat to move back. I did yoga every day and became a raw-foodist—I had to do a daily thing just to be okay here.”

All of this work on her well-being had a remarkable effect on her looks. About a year ago, she and Bündchen were talking about the future. Maybe Kabukuru should become a teacher. Or a psychologist. Or open a spa or a wellness center. Bündchen had a different idea: “I just knew there was something unfinished there. I said, ‘Well, do you ever think about modeling again?’ ”

Through Bündchen, Kabukuru was cast for a shoot in Carine Roitfeld’s new magazine, CR Fashion Book. The fashion editor, who hadn’t seen her since her Gucci days, was taken aback by how good she looked. Kabukuru started telling her about all the alternative remedies she’d gotten into, including hyaluronic acid, alkaline water, and the BioMat, which uses amethyst crystals and infrared heat to purportedly balance the body’s ions. “Carine was like, ‘Oh, my God, we’re all going to be so beautiful by the end of this shoot!’ ”

The story Kabukuru appeared in had a “queens” theme, and she was photographed sitting on a throne by Pierpaolo ­Ferrari. Once again, Pita was the hairstylist. “I’m not sure the ­Kiara I first met would have looked the way Alice looked in that picture,” he says. “She commanded that photograph.” The issue was titled “Rebirth,” in a fitting coincidence. “In my life, there have been all these reversals of fortune,” said Kabukuru, who is currently up for a major cosmetics contract. “I think I was proving to myself my strength and my ability to survive. And now,” she said, “I’m ready.”

she owes everything to God. My heart and best wishes go to her.

Goodluck to her but 10 years is a bit too late. Especially for fashion. She could always give commercial modelling a go. Jonas