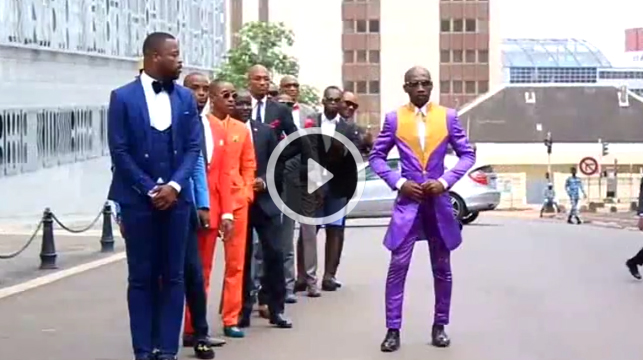 Many in the west would think the suited up trend began with Jidenna’s #Classicman hit single, but in Africa you might be wrong. Right here we have #Sapologie, and it began in Congo from the Sapeurs culture, and Ivoriens are putting the originators to the challenge.

So let’s rewind back and bit if you are not in the know. Daniel Tsamagni gave the world an insight of a hidden Congolese culture of the Sapeurs in his book ‘Gentlemen Of BaCongo’. A group of Congo’s rough town Elite’s and elders dressed in colored suits which in most cases weren’t tailored to them. Their dressing style was a sign of their worth in their neighborhood town.

This culture was then exposed to the world and set the blogs on fire when Solange Knowles dropped the video for ‘Losing You’, working with Daniel to bring this to TV. Later down the line last year, Guinness made a full documentary on the Sapeurs for their campaign which also went viral. Following that was another viral video by Al Jazeera’s on the Sapeurs culture.

Low and behold, a social media battle is brewing in the francophone world regarding Sapeurs in Ivory Coast and those in Congo. Not so different from the Nigeria vs Ghana Jollof, where one shows one off or one mocks the other. In fact, born from the Sapeurs culture is a new word and term #Sapologie, which is now picking up on Social media showcasing well suited up African men especially on instagram.

The latest plight of of the Sapeur battle is this video put out by men from Ivory Coast challenging the originators in the Congo in the video below! PS: This video is in French, Quite funny if you understand and even funnier if you don’t. Enjoy

Posted by spotboxlive.com on Monday, 14 September 2015

Let’s see how far the concept of #Sapologie sets menswear trend in Africa.