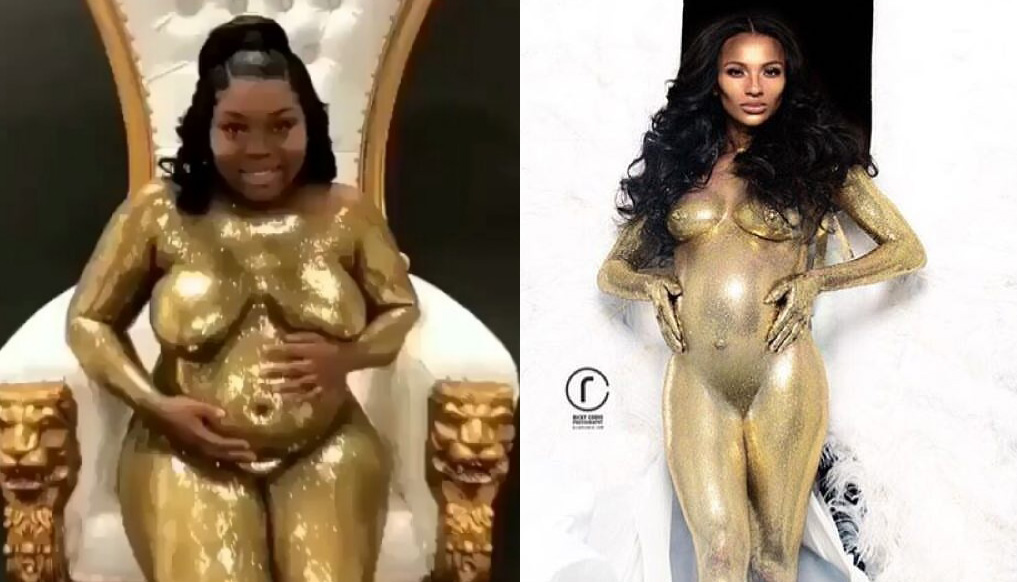 Once upon a time, a semi nude pregnancy shoot was executed beautifully and it got mass attention and it was sensual and lovely. However, then came social media which gave us all unfiltered editions of these.

With Kelly Rowland, Ciara, Beyonce and more beautiful stars giving us amazing nude/semi-nude pregnancy shoots it seems it has inspired a culture of such and with no bounderies to what goes viral online, it seems that some people in society feel some are going to far with it. However, it also seems society reacts differently according to how one looks. If they fit the typical norm of societies hot babe, then they receive compliments, on the other then society tells the pregnant woman she is going to far.

The latest nude pregnancy shoot to stir internet discussions was the gold painted lady who recieved a lot of harsh reactions. Some mocking her figure (breasts), some defending her for being proud of her body, but for the most part, most discussing what was the point?? Watch the clip below and then see further below.

Wow! This shoot though! Let me leave this here and come and be going 🚶🏽‍♀️🚶🏽‍♀️

Funny enough, despite all the criticism received and everyone asking if she is going to far, Tamara Wallace did exactly the same for her pregnancy somewhere around 2016 but received nothing but compliments, even till today. So why is this lady being chastised?