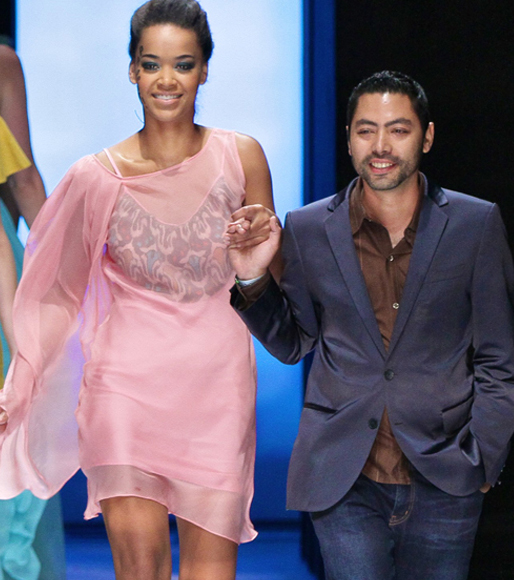 Upon entering O.R Tambo International Airport, one would never think that a fashion show was taking place on Saturday 5 April. It almost felt like an undercover operation – airport workers weren’t even aware of the event and asked if you’re sure that it was there.

It was a rather infrequent place to hold a fashion show but when finally reaching the newly unveiled Oliver Reginald Tambo Memorial Exhibition, you understood why it was hosted there!

Fashion designer Craig Jacobs and founder of Fundudzi clothing, creates pieces that are more than just a fashion item. He draws inspiration from people and places. So when he announced that ‘movement, change and the iconic symbols reflecting post-apartheid South Africa’ motivated his Spring/Summer 2014 collection Freedom20, we were excited to see how he would deliver it.

“In 1994, I cast my vote 14000 miles in a foreign land, and I remember wondering what it must feel like to be free in the country of my birth. It was only four years later, when I touched down on the tarmac at this very airport and I felt the warmth and openness I never remembered in my childhood, that I could truly understand what freedom really means,” he said.

Pre-show activity consisted of guests being treated with champagne and a selection of delicious sushi. Ladies were also able to get a manicure by New York nail salon brand, Essie (who also did the models’ nails).

After being treated like royalty, guests were led into the airport’s International Viewing Deck for the show to begin. The deck was fashioned in a modern museum style, reminding guests of how far we’ve come in our 20 years of democracy. A music mix of our anthem with quick beats established an ambience of history in modernity.

Once the show began, we were enlightened by bright coral colours with creative lines and geometric patterns that were designed onto the models that took the ramp. Each outfit introduced modern pieces with an ethnic flair, driving guests to “oohs” and “aahs” and “oh, that’s beautiful!”

The show ended in great style and served as a great way to celebrate our country’s 20 years of democracy.

Congratulations on a beautiful collection and overall great event, Craig! Check out the pics and video below.