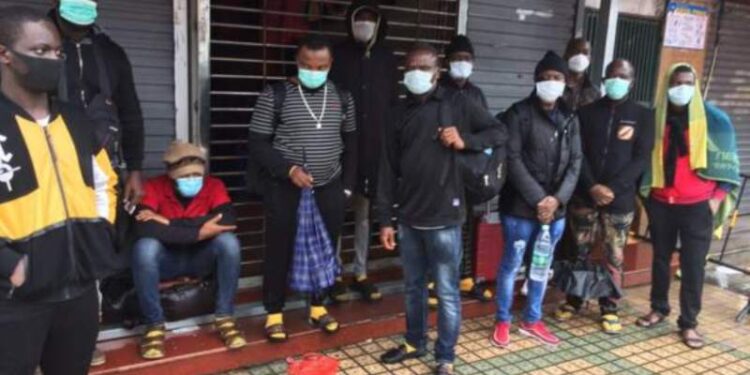 VIDEO: The Africans Abused By Chinese Are Largely Those Helping Them Destroy Africa’s Textile Industry

In no part of humanity should people be treated the way they are being treated in Africa right now. But what is even more despicable than what Africans in China are going through at this moment is the spineless African authorities in power who are doing little to nothing about the case.

These Africans have been victims of forceful testing, quarantine and evictions. It’s a pity president Nana Akufo Addo can accepts all sorts of gifts from Chinese billionaire Jack Ma but can not in return get something done in regards for the accommodation of Africans in China.

Can you also believe the Nigerian ambassador to China managed to retain the seized passports of the Nigerians who were abused but at the end he could not even provide accommodation for them. After giving them their passports back, he left them on the streets and asked them to pray, literally! Here in Ghana, USA has various apartment and lodges to host American citizens in case of any assistants they may need.

But let’s ask ourselves who are these Africans and what are they doing in China. As most of you may know, China has flooded the world with very cheap goods, especially in Africa. One of their main exports to Ghana, and Africa as a whole, is the textile industry.

Yes, the wonderful prints we see and publish regularly across the African nation are Chinese. Ghana/Africa was once a power house for production of African print with ATL and GTP until the Dutch/Vlisco came into power (now bought by an American company and also now own Vlisco, Woodin and GTP). Then later came in High Target (China) which dominated the market with cheap prints.

Now Africa is a very week producer of African prints. In reality in Ghana you will find one or two shops around the corner that do print African fabrics. They are neglected by the mass markets and buyers in Ghana’s biggest markets, Makola market. And made to fiend for one or two clients here and there. Majority of the African prints we so admire that goes viral all over the internet is from China. And majority of the Africans being abused are those involved in the textile and import trade from China.

So to make a long story short. Guangzhou is where the ban on black people has been executed. This is where we have witnessed all the videos of Africans walking the streets homeless, with the Nigerian ambassador to China coming to their rescue.

As usual when such national outcries happen all sorts of videos from the past with tension emerge and you never know which is relative to the current situation at hand. One such video of Nigerians protesting in the streets of Guangzhou, China has surfaced. We doubt this video pertains to the current ban at the moment, however the journalist made a vital observation.

At 1.13sec (-28sec) the journalist acknowledges the nature of the Africans in the city of Guangzhou as those heavily involved in the textile industry.

For years these individuals have contributed to the destruction and limitations of the growth of the African textile industry by helping China invade the markets with cheap print designs.

Yes, it is a sensitive issue and matter of racism so this may sound like a shallow narrative, but it is such little selfish acts like this that has built over the years and gives the Chinese much power to abuse us.

This should be a clear indication and warning to Africans who are indulged in business with the Chinese textile producers to start focusing on working with local textile manufacturers and bringing their marketing skills and knowledge to assist them here despite the difficulties they may face.

We wish the best for all those stuck in China and hope when this is resolved they would realize the importance of building your own first. We have been pushing this point for almost 10 years and will continue to.

VIDEO: Watch Chinese Evicting African Importers And Forcing Them To Sleep On The Streets, A Message To Our Fashion Boutiques