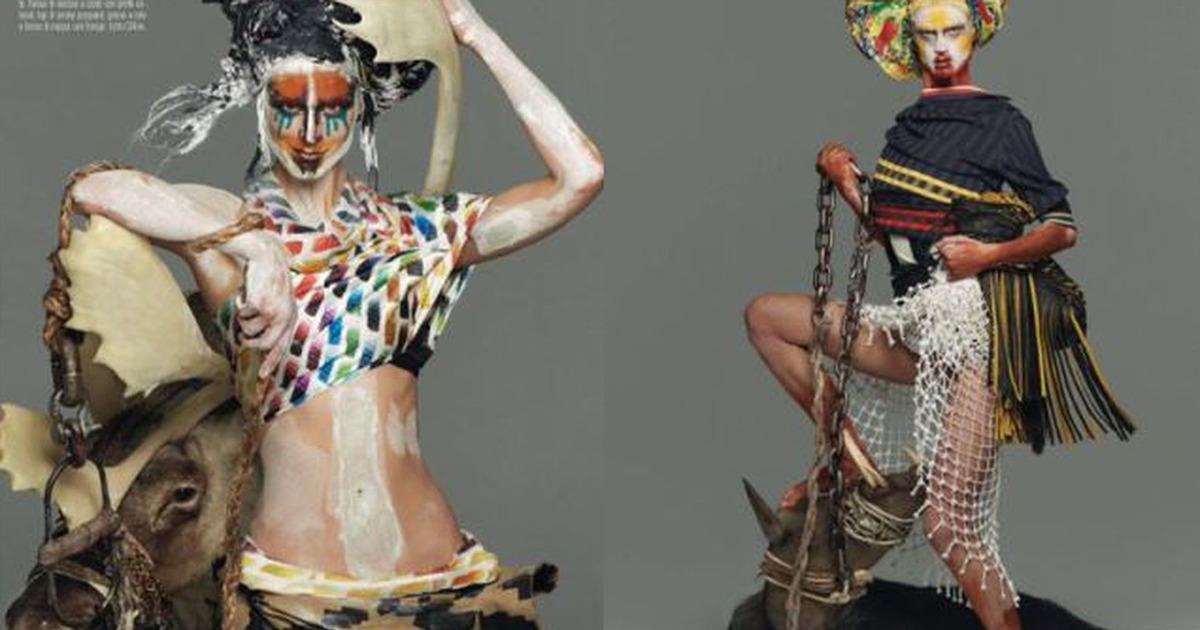 Despite the entire world being fed up with racism in the fashion industry, Vogue Italia has made it theirs obligation to sell itself on the basis of racism. Unfortunately, their noncreative editor can not think of other ways to keep the sales for the magazine afloat in a world where print media is dying, and therefore they have decided to invest in racism. And if you do not understand this, then you will learn more in this article, but for now, here are the recent tribal African face painted images. 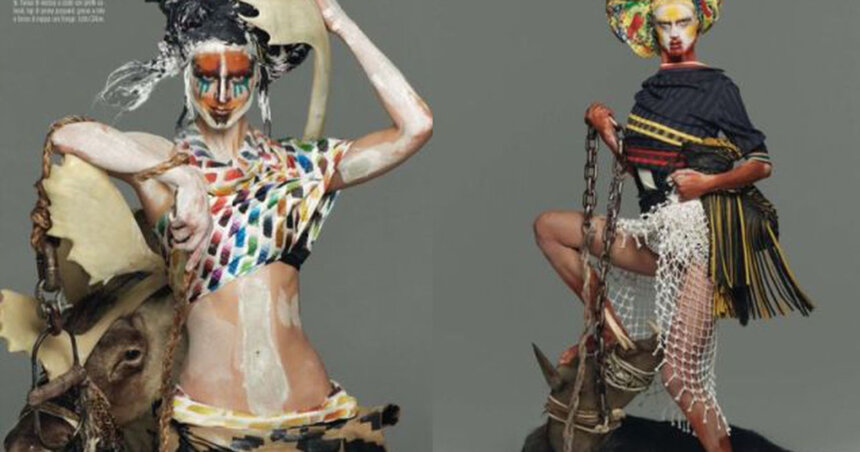 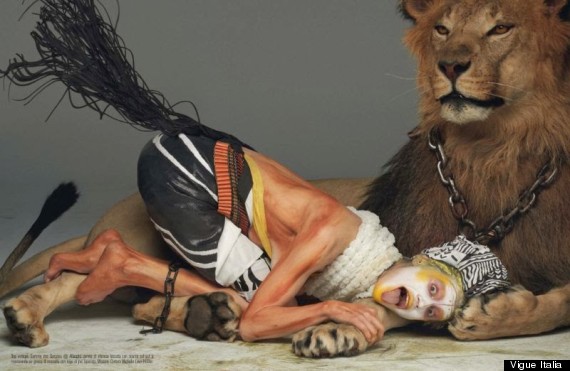 Let’s bypass the expected complaints about black face paint as in all fairness this can be seen as tribal face paints. However, let’s acknowledge that the images above aren’t selling fashion or photography art, but a bunch of funny faces with animals and styling that all together clearly mocks an uncivilized Africa. We are yet to see a caveman editorial in Vogue, and any historical creation of another race as comical as this.

Now, let’s put aside the expected complaints about racism because there is no shock value in racism from this end of the fashion industry. I recall roughly 5 years ago the same Vogue Italia released the ‘Black Issue’ which featured black models. This was heavily supported by ‘Blacks’ and decent-minded people that wanted to see a level playing field with race in the fashion industry.

Back then I was not a journalist, however, I still refused to support the Black Vogue issue in any way for two reasons, and here they are. 1/ Blacks were not crying out for an all-black issue that will separate them from other magazines, that is just is just a further divide, what was being demanded was a fair representation, not a small passing bye book so Vogue can return to its racist day-to-day neglecting of black models and then always have that one issue to look back at and say, ‘We are not racist, we gave you the black issue’.

2/ As a black man, it made sense to instead look out for magazines that have consistently challenged unfair representation, or had a balanced representation of races and support them ‘instead’.

For all those that did not look at things that way and went out to give them your money, here is what your money has now paid for. A mock of Africa.

But notice how Vogue Italia is now making racism the base of its establishment. I am sure there is much more to be added but from my acknowledgment here are some racially based acts on behalf of Vogue Italia.
1/ Black Vogue Issue was launched with much talk about the injustice perpetrated amongst black models which were obviously international news.
2/ Vogue Italia launches the black blog which is a pseudo attempt pretending to support black fashion businesses explained below.
3/ Franca Sozzani travels around Africa with lots of African fashionistas excited about her trip heavily accommodating her and hoping for much whilst she does jack nibble in return…..except publishing one or two of them in the ‘black blog’.

The point I am making is that in the declining industry of print media Vogue has realized that racism sells. Let’s face it, whether you are defending a race, or attacking a race, it is only going to get you more publicity. And when it is that of the African/Black race with no political or organized support, it will only get you more popular, more donors, and more supporters. If you do not believe just ask George Zimmerman, an American who is now signing autographs at shows for shooting a black boy. Or Rush Limbaugh who is popularly known for trashing blacks on the radio.

Here is how it works, you attack black people, the media will make noise about it, people will retweet and share it, black people get angry, more media complains, the institutions and the government ignores them and there you go, you now have free publicity and more sales. And whenever your guilty conscience kicks in you can always throw in another black vogue issue.

These days it seems the media hype behind these racist articles are fabricated for promotional purposes.

I have written a few articles on the racism from the fashion industry, so much so that it now has it’s own category here. The black consumer market is very big, unfortunately racist entities like Condenast, Vogue Italia, Steven Meisel, Franca Sozzani and her merry team, do not want to submit to or cater to it, so they would rather taunt it by heavily being involved in racial tension. But to write about how this should be dealt with would be repeating myself, so instead I would just share this link and you can scroll down to the article about the 16 year old girl.

ABOUT VOGUE’S BLACK BLOG:
Every once in a while you will notice someone from the African continent or a black creative/fashionista from abroad getting excited about being featured in Vogues “Black Blog”. It is obvious to understand why they would be, Vogue is a big brand and they are happy to be embraced, but here is what they do not consider.

Vogue Italia hardly ever to maybe never, publishes anything from the “Black Blog” on it’s social media platform. The Black Blog is a web traffic gaining trick, they publish you in a column that is tucked away on the site from the the main stories. So whilst their core and already discovered audience never visit the “black blog” to view African or black contributions, on the other hand you will be sharing their website extremely excited to your 20,000 facebook friends and twitter followers, and some even linking it to their websites.

In other words, they put together a slack article about blacks in the fashion industry without even allowing their core audience to acknowledge it, and in return you help popularize them and make them international. The last time I checked Alexander Wang wasn’t featured in Vogue Italia’s Yellow blog, or Asian blog. In fact the black blog stories do not even make it to the front page stories.

So whilst some African’s and blacks feel specially gifted that Vogue Italia has an exclusive section for black creatives, the truth is it’s a specified exclusion. You know, like apartheid in South Africa, or Jim Crow times in USA ‘Colored People Here’. And simply because of your skin colour, you will not appear on the main blog stories. Well, unless your name is Rihanna or Eryka Badu or a black celebrity.

The bottom line is simple, Vogue Italia is centralizing it’s sales and popularity around racism, and every time it’s losing traction they pull a controversial trick out the hat, the racist trick. Vogue Italia currently has 1.3millions facebook page likes, but if you ask me, the feedback it receives in terms of comments and image likes does not compare to many other smaller magazines. Maybe they should just allow the magazine to die out instead of furthering racial division and tension in the industry.