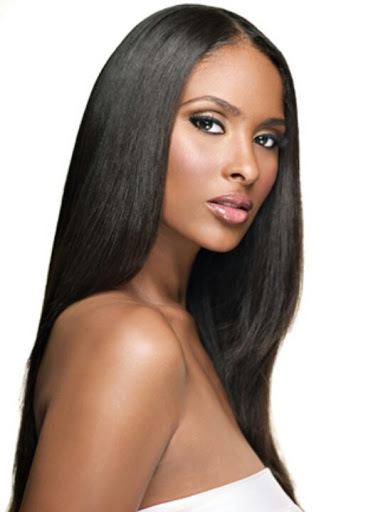 Where Are Those Luxury Hair Choice Of Yours Coming From?

Hair is the beauty of every woman, that’s what really differentiates her from other sexes. For centuries, women have been able to play different roles by changing different hairstyles, and from their stories, we can see that hair contributes greatly to women’s self-esteem, actions and motives. History shows that hair is a symbol of femininity. During the civil war when women weren’t to battle, hundreds of women soldiers disguised themselves as men by cutting off their hair, eventually being imprisoned upon discovery. After the Battle of France in 1940, French women’s heads were shaved as punishment for their sexual relationships with German soldiers. Today a woman’s hair remains a symbol of femininity. Hair and beauty is a multibillion-dollar industry, and the average woman spends approximately $50,000 on her hair over her lifetime and almost two hours a week washing and styling her hair. This is not just because many of us believe that appearances are important, but also because our hair represents our personality, thoughts and beliefs. So when the craze for appreciating a specific hair became the favorite for most women it wasn’t a surprise because there’s a high level of attention that is given to their beauty regime which encompasses the Hair in general. In the quest to go for Brazilian or India, Peruvian etc name the many other kinds of hair which are in the market aside your natural hair and we are asking, How many of us really do know where these hair’s come from, what actually drives us to go for such hairs whilst our hair receive little or no attention, we would in our next hair article give bit by bit tips on how to maintain your natural hair and what is does to you as a person and your hair in general, for this article we want to talk about The  most common hair women go for which is Brazilian hair, what it means and do you even have any idea where it is coming from, note we are not in anyway trying to discourage your or crush anyone’s hustle we are only asking questions and creating an opportunity for conversations like this. So what at all is Brazilian Hair you would say, just incase you have no idea what it is or you have seen it but have no idea what it means.

Brazilian hair is a type of hair used in wigs and extensions. It is a high-quality kind of hair that holds a curl much easier than other wig or extension hair types, it doesn’t tangle up that easily, and is a handles hair dye like a pro! Put simply: Brazilian hair is a charm to style and to keep looking healthy. And because it’s so thick, you often need fewer bundles in order to get that full, voluminous effect. It is instructive to note that the Brazilian Hair’s comes in different types just like we have different skin types, or even hair strands, they inevitably vary. We have Curly Hair, Straight Brazilian Hair, Brazilian Beach Waves, Voluminous Tight Curls, Clip-in Hair Extensions to name but for a few. Go online in search of a wig or hair extensions and you’ll be presented with a dizzying spectrum of choices. Just like we have mentioned earlier “Luxury” virgin hair from Brazil or Peru. “Pure” Mongolian hair. “Finest remy” hair from India. Sleek European weaves. But very rarely will you see hair from China advertised – even though that’s where most of it is from.

China is the biggest exporter and importer of human hair and harvests huge amounts from its own population, Shocker right, how can all these names to a hair which is attributed to names of countries be produced in China. Consult the many online hair glossaries, blogs and tutorials and you’ll be told that Chinese hair is the coarsest, that Filipino hair is similar but much shinier, that Brazilian hair is “full-bodied with a beautiful bounce” and Indian hair is “versatile with a natural lustre”. Definitions are as varied as they are vague. “The more you try to make sense of it, the more elusive it becomes, very difficult to digest. At the top end of the market is “virgin” hair – hair that has never been chemically treated  and “remy” hair, which has been cut or shaved directly from a donor. And then at the opposite end of the scale is “standard hair” often used as a more marketable term for comb waste. Yes, Chinese or otherwise, many sleek and shiny hair extensions start life as hairballs, collected from combs and plugholes. Arent you shocked just like us right now, pheeew here is an image courtesy BBC, EMMA TARLO way back in 2016. 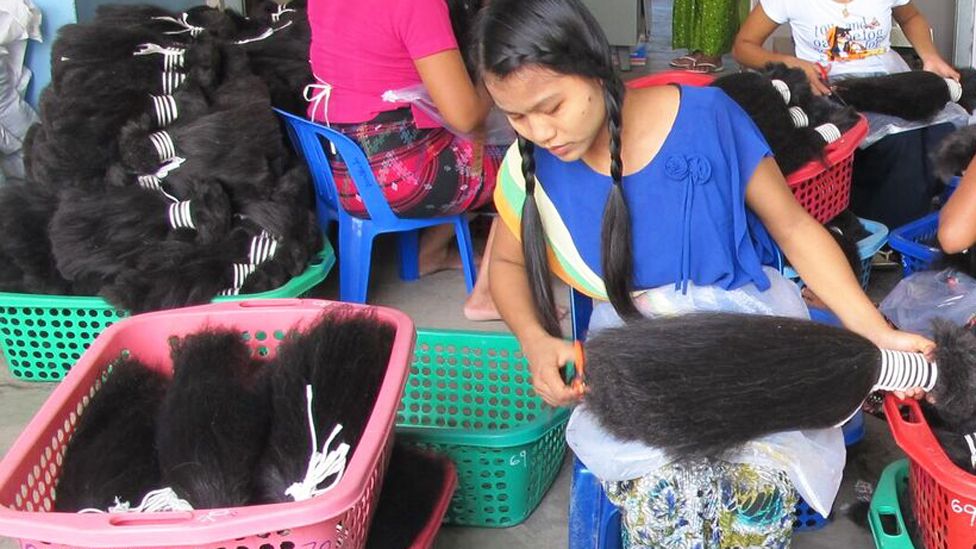 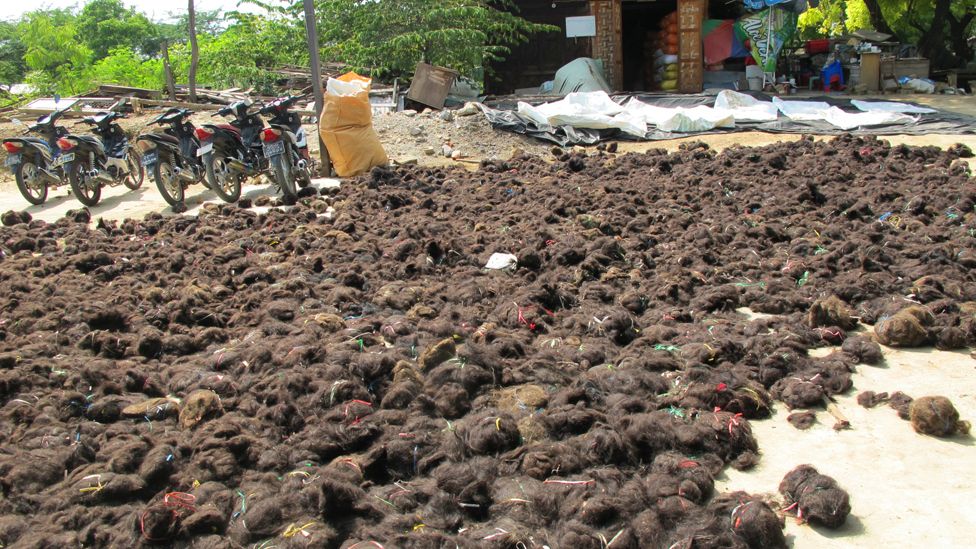 Piles of unsorted hair in Myanmar 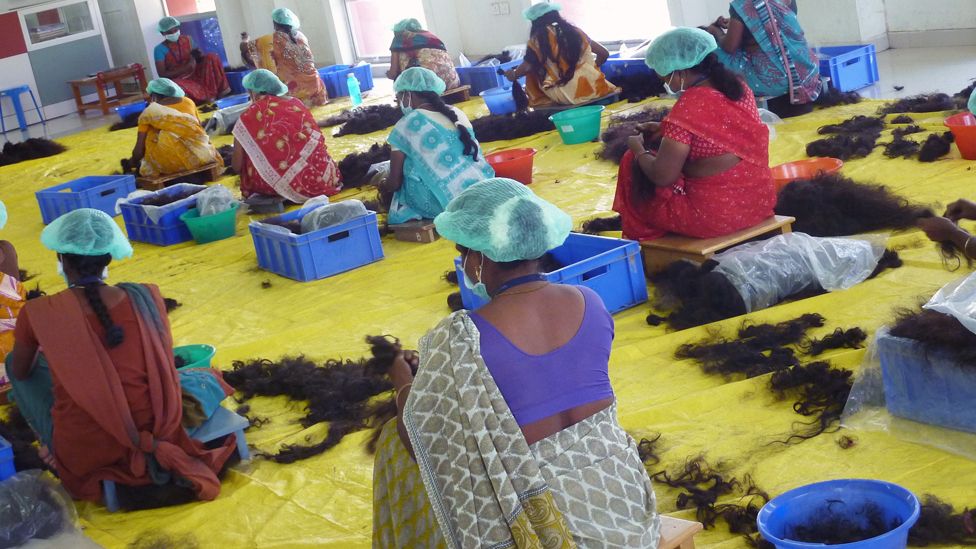 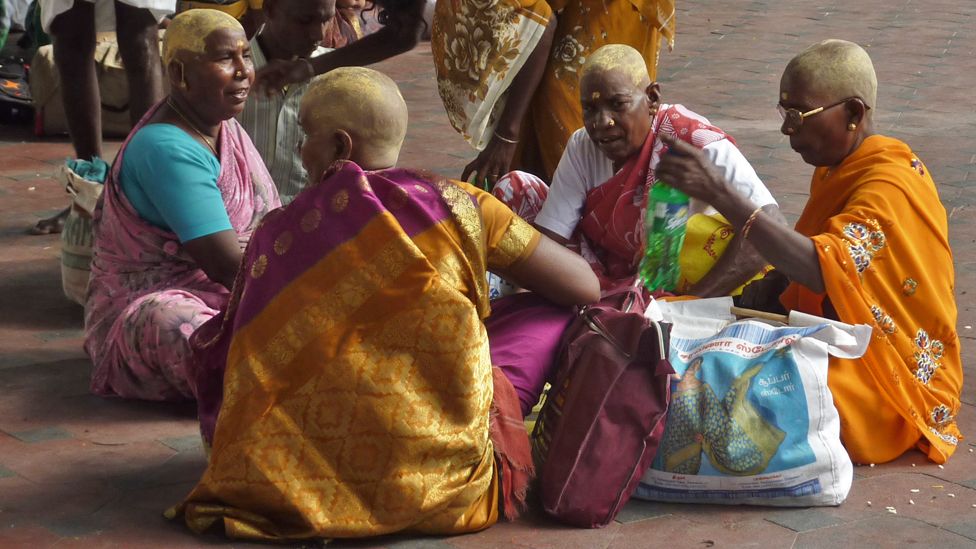 So with all these revelations it is going to beat my mind why some would still want to go a hair type which we all don’t even know where it comes from as to the natural hair we were born with, if you must know, girls with bald head are redefining true African Beauty, What’s your identity as an African Woman, decide now.