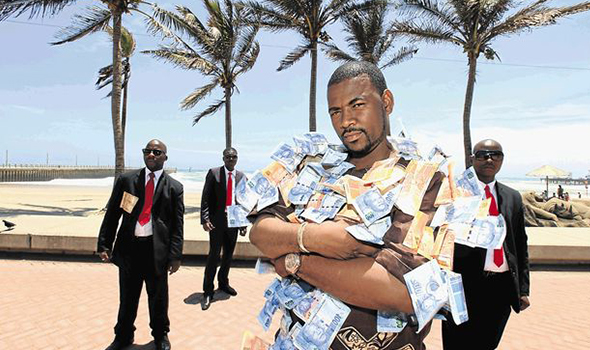 Many people took to social media to critisize Durban herbalist Andile Dlamini for wearing his trademark money suit to Sfiso Ncwane’s funeral in Kwa Zulu Natal, which took place this past Saturday at Moses Mabhida Stadium.

Sfiso’s funeral was held on Saturday morning at the Moses Mabhida Stadium. Pictures of Andile and his popular money suit have been circulating on social media and have caused a stir. 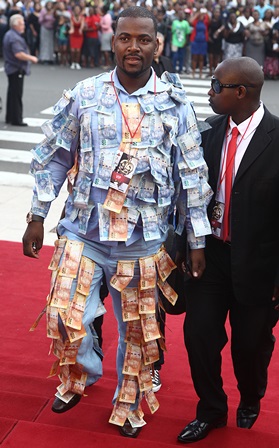 Users on social media blew up, with most comments leaning towards the fact that it seemed disrespectful for him to come to a funeral wearing his signature suit.

Michael Andile Dlamini is just 31 years old but in his short time on the planet is making a lot of money. Unlike some of his young business counterparts, he has not entered the world of finance or medicine, but makes his money selling muti, and is paid for it with cash pinned to his suit.

Reports state that he is raking in as much as R20 000 a day with his cures for everything from pimples to ulcers, shingles to ‘bad luck’, for which he prescribes a lucky soap. Dlamini is certainly a sight to behold as he walks the streets of KZN, since his customers pin money to his suit in payment for the goods they receive. Dlamini claims he was first alerted to his special ability by his ancestors at the age of 12.