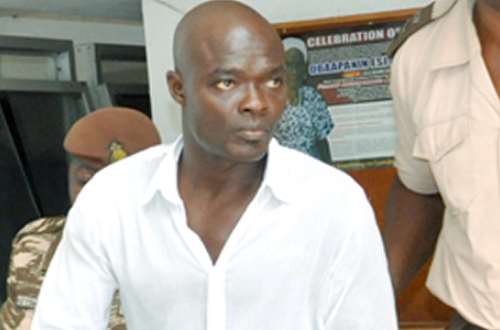 News reaching Viasat1 News says the Former CEO of EXOPA Modeling Agency, Ibrahim, Sima, has died in prison. Ibrahim was sentenced to 15 years imprisonment in 2011 for attempting to smuggle narcotic drugs out of the country in 2009.

Chief Public Relations Officer of the Ghana Prisons Service, DSP Vitalis Aiyia explained that the convicted CEO was playing football when he collided with the goalkeeper but did not complain of injuries at the time, according to reports.

Later in the evening he started complaining of pains and was rushed to the Nsawam Government Hospital where his situation deteriorated. He was sent to the Police Hospital where he died.

The PRO was unable to immediately confirm the cause of death but said investigations are still ongoing.

The former Exopa boss was arrested on September 7, 2009 at the Kotoka International Airport when a search on his luggage revealed tubers of yam in which were embedded narcotic substances.

Sima denied the charges and told officials of the Narcotics Control Board, who interrogated him after his arrest, that the yams were given to him by one Salifu who resides in Nima, a suburb of Accra, to be given to a friend for a fee of 3,000 Euros.