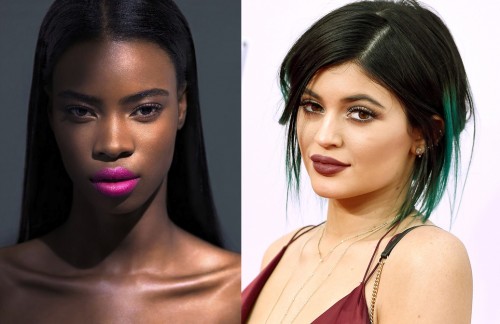 I would hate to make a racial issue out of a fun incident/trend. Just like anyone I am disturbed when any and every issue gets a finger pointed at and it’s called racist……BUT, I find the Kylie Jenner lip challenge fairly racist.

I am the last to follow celebrities in the US, and if I do cover anything regarding them it’s either fashion related or something that was so popular we couldn’t miss out. But I came across a video below with a new report on the Kylie Jenner lips challenge.

We understand the appeal of having big, full lips like Kylie Jenner… but we're not so sure about this #KylieJennerChallenge. Girls, please don't hurt yourselves with shot glasses. Or, at the very least, make sure you catch it all on camera. Would YOU ever try this challenge? Subscribe for more videos! http://full.sc/NfhdwDKylie Jenner Lip Challenge Fails: https://www.youtube.com/watch?v=Dn-JFHs0dYo&feature=youtu.beLet us know your favorite videos of the day in the comments! If we make a video based on your suggestion, we'll mention your name on a future episode!

The challenge sees people taking to social media to suck their lips out by using a small glass to get fuller lips, and it’s called the Kyle Jenner lip challenge. So the first thing I did was I went to google this lady, because I really don’t know her except the fact I have seen her name on one or two articles recently stating who she modeled for. And when I did, I asked myself, ‘Is this what is being acknowledged as full lips? Is this the lady who this racket is about?’ Even Naomi Campbell has fuller lips than her.

So why is it that ever since I was a kid when I moved to the UK at the age of 14, Europeans always mocked fuller lips which I was proud of having, and that American tv always mocked fuller lips, and then the first lady of white complexion with (what is classed as) full lips is all of a sudden the queen of full lips that now has a fuller lip challenge. Erm! Did I…err..miss something. That’s really the state I am in at the moment.

Once upon a time, a rapper by the name of Sir Mix A Lot made a song called ‘Baby Got Back’ which Nikki Minaj sampled for Anaconda. Most of the younger people will listen to the track and enjoy it, but most of them would have no idea of the racial connotations behind it. You see once upon that same time, women with voluptuous bodies, mainly bottoms that most black women carried, were classed as fat. If the word ratchet existed back in those days it would have been used against them.

Yes, it’s almost impossible to believe that there was ever such a time. But If you don’t believe it watches the video. The song starts with a white girl speaking of a black woman’s butt, but in disgust. In fact, a line from the song stated “Well Comsos (cosmopolitan magazine) says you’re fat, well I ain’t down with that/ Cause your waist is small and your curves are kicking / And I’m thinking about sticking.”

Having big bottoms was like a curse to the non-black world. Hence why the Baby Got Back song was very rebellious and a heroic stand for the admiration of women in the black world, I recall all my sisters dancing and celebrating when we were watching it on TV in Ghana. something that you might need to know if you are young. In fact, you will realize in the video, the butts being admired weren’t even half as big as what is being exhibited in media today, so that should give you an understanding of how curves were critiqued back then.

Unfortunately, Sir-Mix-A-Lot was not able to make a cultural revolution for whites in America as powerful as his song was. This curse was only lifted off when J-Lo came out. In fact, there was so much noise regarding J-Lo’s butt, I had to watch her videos over and over to try and find out what it was about her butt that made her this butt sensation. And I could never get it. I mean she had hips, but I was gobsmacked and puzzled that she was the name to quote for big butt references.

So why does this become a racial issue? Well, we know all cultures and races have attributes of admiration and unique beauty. However, it seems as though most attributes common to African women are deemed unattractive until the age where nonblack women can either embrace it via butt injections or sucking their lips through a small glass, then it gets the social trend thumbs up with a nonblack woman as the poster child.

Would I complain that the mainstream media mostly from the west are not promoting black women? Never! I will never complain about the lack of black actors, models, or stars in anything organized by any other country or race. That is not their responsibility, that is the responsibility of the beneficiaries and their media to promote our features and talents. It’s business, a resource that benefits you, so why should anyone else do it but you?

Where my position lies is don’t discredit it if you have a secret admiration for it. Don’t deem it as ugly if you have been awaiting your turn to have it. Don’t suppress people with false images that they are not beautiful when you know they are, and then wait for that magical day when you have a Kylie Jenner and get the world sucking through a glass. Because it does bring questions about either 1/ the society or 2/ the media circulating that society.

Nevertheless, the media is beginning to acknowledge the dangers of sucking lips through a vacuumed glass. Most of the participants are ending up with busted lips, bleeding, irregular swelling, lips not returning to the norm in a number of days. So as always, this trend, or at least for some, will be coming to an end soon. Let’s hope fuller doesn’t return back to “ugly” when that happens.

PS: I will like to make it clear that this article is not a critique of Kylie Jenner but more of the media’s reaction to Kylie Jenner.

More on Racism and Prejudice In Fashion
Racism