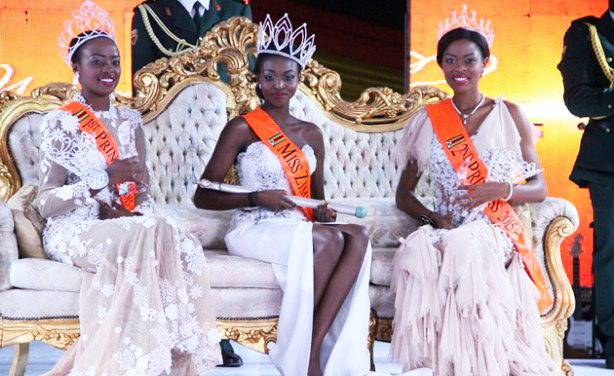 Earlier we published an articles about nude images (see here) rumoured to have belonged to Miss Zimbabwe Emily Kachote. As well as documenting a very similar exposure of a previous Miss Zimbabwe.

Now it is full confirmed the images that surfaced are of Emily Kachote and they were released by her former lover. She is now dethroned. Hopefully this would be a lesson to girls who feel the need to throw naked pictures of themselves around. When repercussions occur no one but you will be responsible, so keep your naked pics to yourself unless it’s job/profession related. Please read the report by AllAfrica.com below.

Emily Kachote was on Wednesday dethroned as Miss Zimbabwe World 2015 after she was nakedly betrayed by a bitter former lover. Uneasy has Kachote’s crown been sitting since her vengeful ex-lover leaked pictures of her posing stark naked.

Commenting on the saga last month, the 25-year-old financial advisor told local media she had hoped her former boyfriend would have deleted the images.

“I was hoping the pictures would have been deleted by now since it happened a long time ago and I last spoke to the guy a year ago and I no longer have anything to do with [him] since what we had ended a long time ago,” Kachote was quoted as saying.

“I have always suspected that those pictures would circulate, but it happened a long time ago, and I believe my past does not determine where I am going.”

She will be replaced by Annie Grace Mutambu who was her first princess.

The Miss Zimbabwe World board confirmed the latest development.

“The Miss Zimbabwe executive board would like to inform the nation that it has resolved to dethrone Miss Emily Kachote as Miss World Zimbabwe 2015,” read a statement released Wednesday.

“Early this month one of the local tabloids carried a story, which alleged that Miss Emily Kachote’s nude photos had appeared on a WhatsApp group.

“This report came shortly after Miss Emily had confessed that she had once posed nude.

“This was in violation of the rules and regulations governing the Trust which all the contestants appended their signatures to.”

Among the rules of the competition, “winners of the Miss Word Zimbabwe beauty pageant, whether a title holder or a runner-up must not have posed nude professionally or socially in all forms of media.

In addition: “Being in a relationship, sexual advances towards anyone and any behaviour categorised as immoral by the Miss Zimbabwe Trust is grounds for instant disqualification and dethronement.”

In its statement Wednesday, the Miss Zimbabwe World Trust said: “It should be noted that during the scouting and the preceding boot camp all aspiring models appended their signatures to these regulations and undertook to abide by them.

“The confession by Miss Emily Kachote that she once posed nude and her admission of the existence of the photos led the Trust to dethrone her since her conduct was a precise violation of rules governing the Trust.

“The First Princess Miss Annie Grace Mutambu has since replaced Miss Emily Kachote. In its quest to have a probity queen the Trust will not hesitate to effect its rules and regulations governing it.”

Oh wow, so this was true. This should be a big lesson for every lady and especially pageant girls.

This is a real evidence that your past can come crawling back to hunt you. Young woman these days don’t respect themselves and do disgraceful things tagged in the name of love. I plead with this generation to bring decency back.

“Men” these days are soo not mature! They cant handle things well. Why would you even leak pictures of your ex? All because of revenge…This is such a childish act.