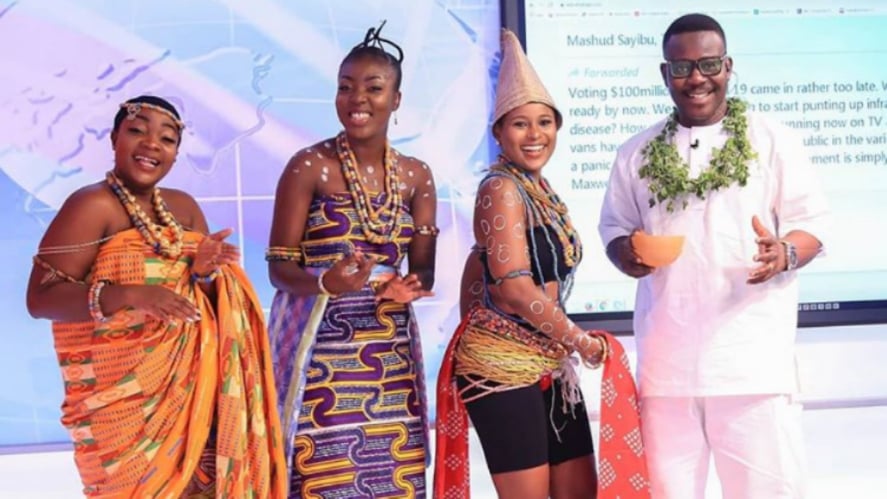 Pics: See How Tv3 Celebrates Their “Dress Up Friday” As Part Of The Wear Ghana Month In Their Studio

One of the most popular Television stations in Ghana Tv3, has taken the celebration of Ghana’s independence on their neck and not ready to put it down yet. As the month of March of every year is declared as the independent month and wear Ghana month, all Ghanaians are expected to promote our lifestyle,culture  and heritage.

Tv3 who has been in the Ghana media since 1997 took today on the 13th of March as “Dress up Friday” to represent all the cultures and heritages every tribe and region have here in Ghana.

All their tv presenters and program hosts came in with a great representation of the tribe they belong to or dressed in a culture or heritage of their lands. Program hosts like Johnnie Hughes of Tv3 “New day”, Tv3 News Caster Grace Asare, Miriam Osei Agyeman and many others came to represent their culture.

They all spruced up in adorable and rich culture that will make every Ghanaian love and be proud of the country’s heritage. Johnnie Hughes who hosted Tv3’s New day Program represented the culture of the Ga’s, he came out as a  “Wulomei”, dressed in all white with some green leaves around his neck.

Grace Asare also was looking stunning with her “oyere foforo” look from the central region of Ghana, whilst Miriam Osei Agyeman also hit the screen during the midday news with a local Ghanaian woman style of dressing.

Berla Mundi also rocked the screen with  the rich culture of the Odumase in the Eastern region, she dressed to represent a popular puberty right known as “Dipo”. Many others aside those we’ve talked of came to represent their tribe and their rich culture; Lets see some pictures below:

? #MiddayLive comes up next with @afiamiriam. Tune in for the latest news updates.

Dress up Friday on #TV3NewDay. Seems we are ushering @berlamundi into puberty with Dipo ?

Not your regular morning show. We are playing dress up on #TV3NewDay. Tuned in yet?