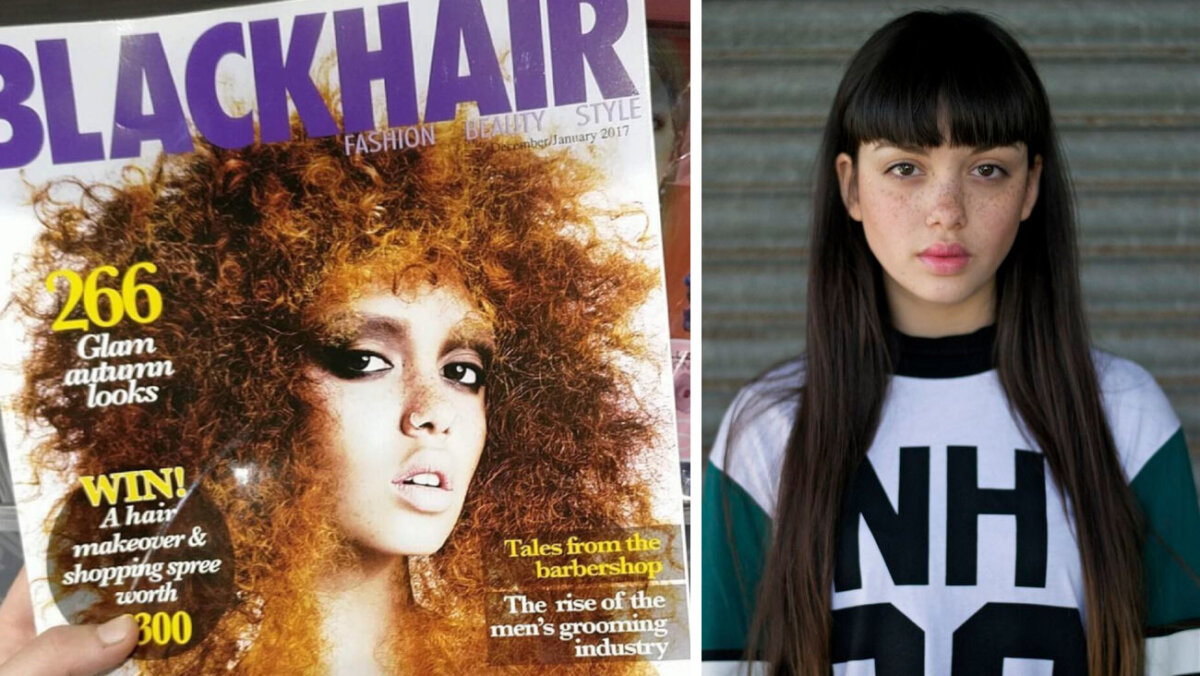 White Girl Appears On Black Hair Mag Cover Unknowingly & Then Apologizes To Black People! Is There A Twist To It?

It is questionable how a magazine specialized in black hair can not tell the difference between black women and a mixed white/Malaysian lady with ginger hair and freckles, so maybe the editor Keysha Davis may need some soul searching. Then again, all it takes is curly hair for most people in the west to lump you in as black…..just ask Rachel Dolezal, a white woman who ended up being the head of a black activist organization NAACP because the members thought she was black.

So how did this mistake happen in the first place you may ask? Keysha Davis explained in a facebook apology also thanking Emily Bador for bringing the issue to the magazine’s attention. Davis stated that she and the editorial team were not aware that Bador was not black or mixed-race prior to selecting the image.

“We often ask PR companies/salons to submit images for the magazine, specifically stating that models must be Black or mixed race,” Davis wrote. “We can only take their word for it, and of course, try to use our own judgment.”

In case people don’t know, PR companies that may be responsible for the promotion of a said model or business or entity, seek the best way to brand the same individual to the wider public. And in this case they sent Bador’s picture to the magazine.

So Bador, very considerate, took to her instagram to issue the following apology….

I would deeply and sincerely like to apologise to every one for this, and black women especially. I would like to clarify, I believe this shoot is from when I was around 15 and didn't understand cultural appropriation or the impact it has on POC. I was uneducated, which obviously is no excuse, ignorant and immature. Growing up in a very very white city, I had no idea the struggles black women face and how often they were persecuted for their hair. I didn't understand how black women are constantly told their natural hair is inappropriate/unprofessional for the work place, or how young girls are told they can't go to school with natural hair. I didn't understand that shoots like this support the very Eurocentric beauty standard that the mainstream media focus on which reinforce the idea that black features are only ok on white women. I didn't understand that as a white passing woman I'd be praised for this hair, but if I was a black woman I'd be persecuted. I didn't understand cultural appropriation. ✨ I do regret doing this. I hold up my hands, I'm so so so sorry and I'm very sorry this cover was taken away from a black woman. This image is (I think, although I'm not 100% sure) about 3/4 years old, it was never intended to be on the cover of this magazine. If I had known it was going to be published, I would never have condoned it. I'm upset and angry I was never asked by the photographer/hair salon/anyone if this image could be used for the cover Black Hair. ✨ I'm so glad I've educated myself and surrounded my self with people to teach me what is right and wrong. I constantly am learning and becoming more and more informed. It's important to come forward and be honest with ourselves about our past mistakes, otherwise we will never learn. Again, I'm truly, deeply sorry to anyone I've offended and I hope if nothing else this post can educated others so they don't make similar mistakes. (also please let me know if I've said anything wrong or offensive in this post!!! or anything i can add!!!! i love u all sm and the last thing i want to do is offend or hurt any one, i really hope you don't all think im a massive twat ?)

As many of those hung up on racial controversy will disagree with me on this one, I don’t think she needs to issue an apology, and in some ways neither does black hair magazine, with the exception of their negligence of their work.

And in all actual fact, I don’t even think out of 1,000s of issues one cover with a white girl on it is bad, as long as it stays on topic regarding black hair and black hair styles. But it is understandable for branding purposes, reputation, and to avoid heat in their social circles it makes sense to do so.

BUT HERE IS THE QUESTION I HAVE FOR YOU: Racial controversy has only further promoted businesses in the fashion and beauty world with no real backlash. In fact with some of the intriguing characters amongst certain lifestyles in the west it seems some even flourish more after their racial discrimination, just ask Vogue magazine.

Could this be a PR stunt by her PR company? Let us know your thoughts.