Glamor was the appointment of the first two evenings of the second edition of the fashion event of the capital. Projectors highlighted well superb collections, creations of sixteen African stylists and designers made ​​essentially ready-to-wear and haute couture creations at the sports complex Shark Club on 18 and 19 July

The beautiful people come to the second edition of Kinshasa Fashion Week (KFW) was admiration for the parade of models, over two hundred presented in two evenings, which delighted the eye and sparked the interest of some. It must be said that the stylists and designers participating in this high mass fashion Kinshasa home since last year have been creative.

A tribute to his host, Gloria Mteyu, the DRC was represented at this great social event by a dozen designers, the “Okapi Fashion» Carine Pala Sammy Okasol, through Mary Omba , Tiffahny Dians, Marie-France Mumba, Hermeland Matuzeyi, Cart Kabala Glora Nkayilu particular. If the campaign has managed to steal the show, making its appearance in almost all creations presence, raffia and Ngoto, local materials, managed to carve out a place and to please.

We have also appreciated the participation of designers from elsewhere to KFW 2014. Presence of Congolese Diaspora stylists, like Pam Mertens Brussels did not leave indifferent. 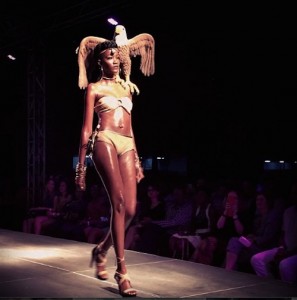 Noella Tapasu of Paris and Kahindo Mateene Chicago have not offended, far from it, just like the Nigerian Yemi Osunkoya came specially from London. Vlisco and chose to sign his contribution to the party with Eloi Sessou Côte d’Ivoire and Kinoise Fany Mandimba added his grain charm to this glamorous event wanted.

Question of honor at the Higher Institute of Arts and Trades (Isam) the first night, the second KFW opened its catwalk to his students, hoping to bring an ounce of inspiration to the new generation of local designers. Under the Marcisse, and Cedric Marcel Selemani Isengoma, students respectively in 1st and 3rd license graduate label had the privilege to present a work made ​​from a mixture of cloth and cotton.

In addition, always open, even remember the reputation of Kinshasa world city of undermining, some of the firefighters who roam the streets of the city were of the party. The foals show the famous Papa Griffe captivated eyes. As usual, ten firefighters were featured look great for showing off during the supposed clothes overpriced prestigious brands.

First Lady Olive Kabila Lembe presents the second evening, expressed his admiration in discreetly. The spotlight off the end of the evening of 19 July, the podium ceased to be the focus. In fact, all day Sunday, from 10 am, open stands made ​​available some of views held yesterday and the day before. Sunday, the visitors enjoyed closer and daylight collections presented during the parade exposure. Some of them, but also shoes and other fashion accessories as well as products of different economic and cultural operators instead also exposed were sold.

Required under the sign of glamor, the three days of the second KFW, organized by Events + Media Revolutions have been one of the major events of the weekend. The organization was pleased to be able to keep his challenge: to publicize once more Congolese designers on the international scene and encourage the consumption of products made in DRC’s primary purpose to highlight the abundant creativity with support put in the promotion and development of the local textile industry and clothing.