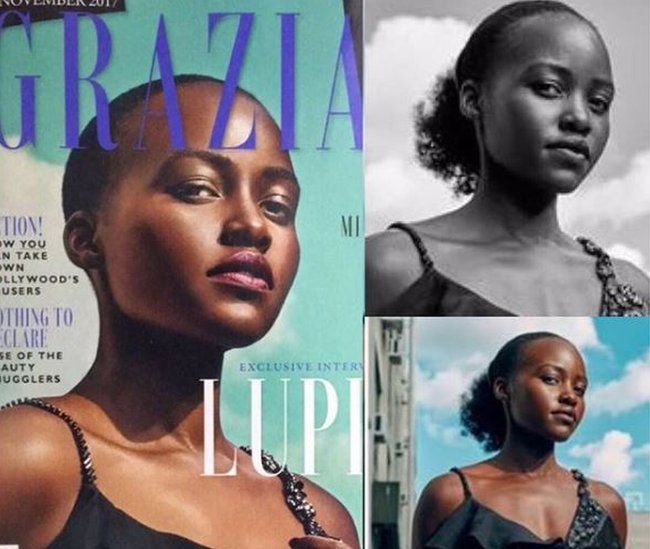 Twelve Years A Slave star, Lupita Amondi Nyong’o she took to Instagram to call out Grazia magazine and express her disappointment at the publication. The Actress, Lupita Nyong’o has poured scorn on Grazia Magazine after her natural hair was edited in a front cover photo shoot.

As I have made clear so often in the past with every fiber of my being, I embrace my natural heritage and despite having grown up thinking light skin and straight, silky hair were the standards of beauty, I now know that my dark skin and kinky, coily hair are beautiful too. Being featured on the cover of a magazine fulfills me as it is an opportunity to show other dark, kinky-haired people, and particularly our children, that they are beautiful just the way they are. I am disappointed that @graziauk invited me to be on their cover and then edited out and smoothed my hair to fit their notion of what beautiful hair looks like. Had I been consulted, I would have explained that I cannot support or condone the omission of what is my native heritage with the intention that they appreciate that there is still a very long way to go to combat the unconscious prejudice against black women's complexion, hair style and texture. #dtmh

The 34-year-old Oscar winner also shared a lengthier statement on Instagram, saying that there was still a “very long way to go to combat the unconscious prejudice against black women’s complexion, hair style and texture.” she ended both her posts with the hashtag #dtmh (don’t touch my hair). 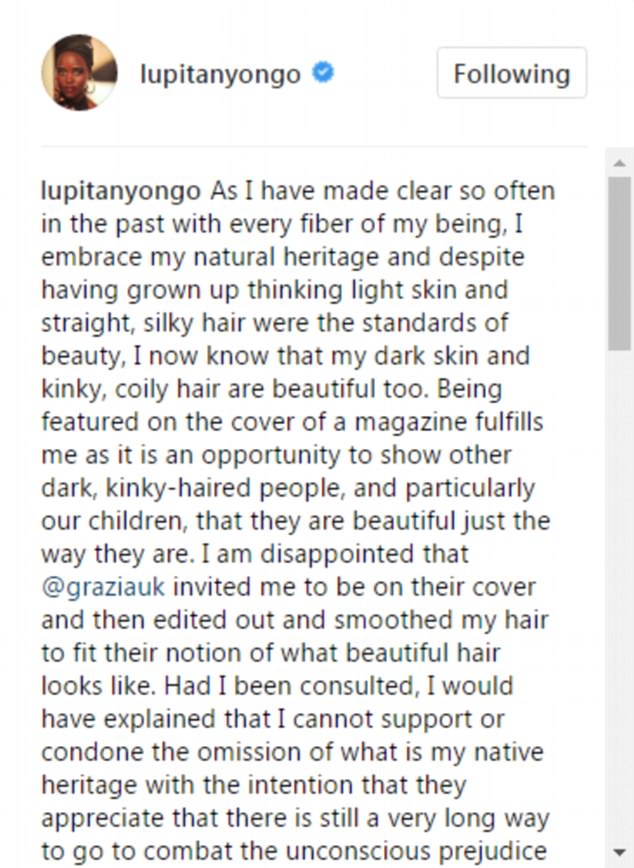 Grazia has since responded, apologizing to Lupita Nyong’o saying: ‘Grazia magazine is committed to representing diversity throughout its pages and apologizes unreservedly to Lupita Nyong’o’. they said. ‘Grazia magazine would like to make it clear that at no point did they make any editorial request to the photographer for Lupita Nyong’o’s hair to be altered on this week’s cover, nor did we alter it ourselves. But we apologize unreservedly for not upholding the highest of editorial standards in ensuring that that we were aware of all alterations that had been made’

This was not an inescapable situation. This was a huge editorial oversight, which demonstrates a need for a diverse team and more awareness about representation.