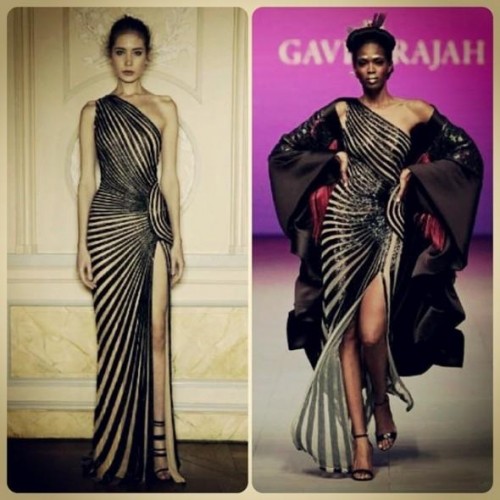 The prominent South African designer has been accused of plagiarism after one of his designs was questioned for looking strikingly like Lebanese designer Zuhair Murad’s creation from a show last year.

Well-known local designer Gavin Rajah has responded to the copycat allegations made against him on social media.
He was first accused of copying his latest design by Sim Tshabalala (the event producer and director responsible for events like Fashion by the Sea), according to Times Live.

Sim, and now various others on the designer’s Facebook page, have said that a dress Gavin debuted at the recent Cape Town Fashion Week was stolen from Lebanese designer Zuhair Murad’s Spring/Summer 2013 collection.

The scandal has also caused a stir on Twitter with many saying how disappointed they are in Gavin, but also confused by how similar both creations are.

According to IOL, Gavin would prefer to host his own shows in the future rather than do fashion week after being very disappointed by the experience.

After a few days of complete silence, Rajah finally released a statement on his Facebook page along with reference images and an email from Gavin’s attorney to Sim asking him to “resolve this issue in a constructive matter, and desist with further unfortunate and unsubstantiated public allegations.”

“People who know our brand and know me will know the truth. My studio, working sketches, references and patterns remain open for inspection at my studio at any point for those wanting to assert the truth and not simply wanting to be part of a malicious campaign. My design process is open for all to see. No one is above the law or reproach and none of us should have that much hate in oneself to be able to want to destroy another.”

Unfortunately this does not explain why the dresses are practically identical. We contacted Mr. Rajah’s publicists and they maintain that the dress is Rajah’s own original design. “The dresses may appear identical to the untrained eye, however there are vast differences between the two,” they said.