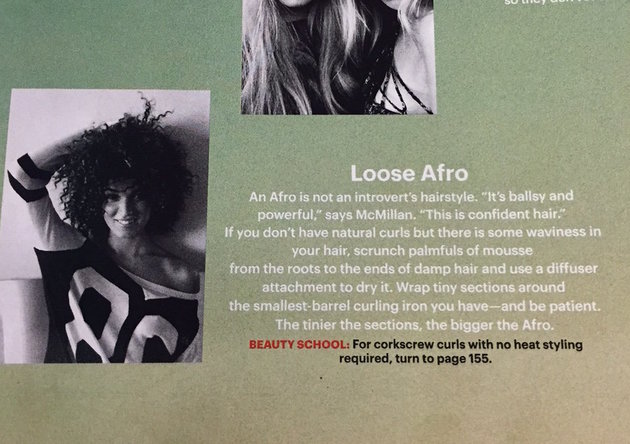 Once again, cultural appropriation is igniting a flurry of controversy — and for the umpteenth time, the case relates to black women’s hair.

Allure Magazine finds itself in the middle of a stormy response to a hair tutorial published in its August 2015 issue titled, “You (Yes, You) Can Have An Afro.*” The asterisk reads: “even if you have straight hair.”

The tutorial features photos of a white actress, Marissa Neitling of “The Last Ship,” and supplements a beauty feature called “Back To Cool” by Danielle Pergament. For the story, hairstylist Chris McMillan transforms the tresses of five Hollywood actresses into hairdos popularized in the ’70s: the bowl cut, soft bends, long bangs and an Afro.

It’s no surprise that the article, presumably aimed toward white women, is causing quite the commotion. Considering the importance of the Afro to the African-American cultural identity and its politically charged history, there are several reasons this editorial has rubbed folks the wrong way.

“The issue with the Allure feature goes beyond the routine criticism for not using an obviously black woman and the missed opportunity to reach beyond what clearly must be a predominately lily-white readership and offer tips to black women on how to style their afros rather than steal a style not meant for them,” reads the reaction of editors at Clutch.com, who along with the folks at BlackGirlLongHair.com were among the first to spot the editorial. “Black women didn’t start wearing Afros to be cute,” they note.

The Afro style in particular would have been an amazing opportunity to use a black actress, and yet there were no actresses of color used in the feature. We were reminded of the recent situation in which Teen Vogue was criticizef for using a white model to showcase Senegalese twists.

An Allure spokesperson told The Huffington Post the piece reflects the level of self-expression “happening in our country today”:

“The Afro has a rich cultural and aesthetic history. In this story we show women using different hairstyle as an individual expressions of style. Using beauty and hair as a form of self-expression is a mirror of what’s happening in our country today. The creativity is limitless — and pretty wonderful.”

But notably, that appreciation of the Afro’s “rich cultural and aesthetic” history wasn’t mentioned in the piece, so paying homage to its beauty by offering steps for white women to emulate it without the appropriate historical context and respect is problematic.

The tutorial also uses the derogatory term “rag curls” in reference to manipulating hair into an Afro. Again, we cringe. The line between cultural appreciation and cultural appropriation  is not blurred — it has been crossed. At the very least, the poor choice of wording and use of a white model is due to bad editing or a likely lack of diversity at the decision-making level.

Had Allure referenced its adoration for the Afro, perhaps this feature wouldn’t be coming under quite as much fire. 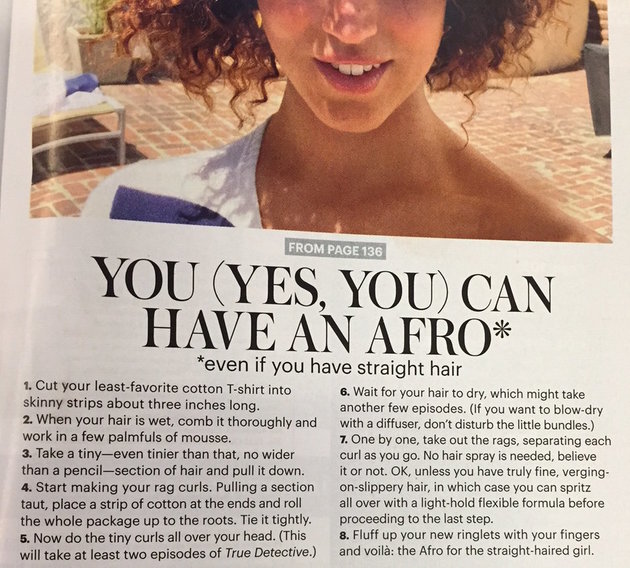 McMillan, the hairstylist who worked on the feature, told The Huffington Post that the use of the Afro on a white woman was inspired by Barbara Streisand in the movie “A Star Is Born.” He also said that he’s surprised by the negative response and wanted to read more about the controversy surrounding the Allure feature.

“I learned how to do hair from the African American girls in beauty school and they taught me more about hair than anybody,” McMillan said. “And I do black hair.”

We asked some top black hair bloggers, hairstylists and influencers in the black community for their reactions. Here’s what they had to say:

“This latest gaffe by Allure further highlights the need for more black writers and editors to be on staff of mainstream magazines, so someone in the room can school them on why teaching white women to copy black hairstyles might not be a good idea. What we’ve seen time and time again is that people love black culture and creativity, but not black people. These publications need to do more than just using black folks as style inspiration.” –– Britni Danielle, Clutch

“I laughed pretty hard when I saw this, but then I felt annoyed. This isn’t an Afro. This isn’t the same as a black woman wearing a perm or a weave–do recall we were introduced to hair straightening at a time when we were made to feel that our hair was a problem to solve. This is just tone deaf appropriation and it’s particularly irksome considering all the public conversation we have around these things.” –– Jamilah Lemieux, Writer and editor at Ebony.com

“This is tone deafness in the guise of inclusivity. While there are plenty of white women who have naturally thick, curly hair and could easily have an Afro, the misstep here is with the model, and the idea that you can pull off cultural appropriation as a fun summer style. The natural hair movement is rooted in giving black women the confidence to accept their natural beauty in a way mainstream magazines generally fail to do; this article is cruel and taunting by comparison.” — Danielle Henderson,  Writer

“Honestly, I didn’t get offended at all when I read the Allure piece. I’m flattered actually. Considering the fact that white women have been doing things to look like us for decades now (i.e tanning, lip injections, butt injections, etc.), it’s actually pretty astounding to see that they now want to replicate our curl pattern. Imitation is the highest form of flattery. To me, it’s funny and not really cause for protest. Sometimes we take these beauty stories too seriously. We’ve got way more disturbing headlines (like Sandra Bland, for example) to be upset about.” — Christina Brown, Founder of LoveBrownSugar.com

“I am truly a bonafide hairstylist that loves all the innovations that come out of my  industry, and I  believe that women with kinky hair have the right to wear their hair straight and women with straight hair have the right to wear their hair in a kinky curly Afro. But I am also one of many new gatekeepers of the institution of beauty and a soldier for diversity. The problem with Allure and its critics is that Allure see itself as the beauty bible but comes up short on images and subjects that reflect the real world we live in. The magazine creates the problem of appropriated ethnicity and ruins it for everyone that wants and has the right to look how they choose — without the baggage of hair hate that is created by old gate keepers that still think ‘African American’ is a texture.” — Anthony Dickey, Hairstylist and owner of  Hair Rules
Julee Wilson
Senior fashion editor, The Huffington Post
african womenafroAllureblack haircurlHuffington Postmagazinepost
Share FacebookTwitterPinterestLinkedinWhatsappTelegram