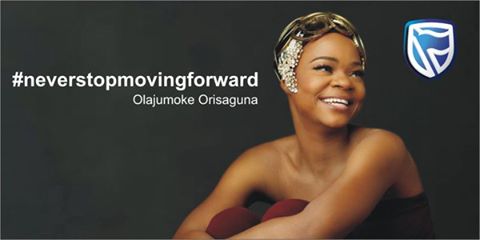 Stanbic IBTC has just unveiled breadseller-turned-model Olajumoke Orisaguna as a face of the multinational bank.

“We’re inspired by Olajumoke,” the bank shared a photo of the young mum of two on their official Twitter handle moments ago, adding, “we’d love to move her forward.”

A quick look shows that they used her photo from the ThisDay shoot for the new campaign,“#neverstopmovingforward”, emphasizing that they intend to join other corporations in improving the life of the new model.

In her CNN feature last week, Olajumoke broke down in tears as she spoke for the first time. “I never expected that this could ever happen to me,” Olajumoke says, “My friends have told me they saw me on TV and they are really happy. My parents cannot believe their own child can become such a success. They are all so happy.”

For TY Bello, she says she didn’t think she took a great shot when Olajumoke walked by, but after she got home and went through her edits, everyone thought she was a model.

“No one believed she just walked past,” the photographer and singer said. “It occurred to me that if everyone thought she should be a model then maybe she should be one, then the search for her began.”

CNN’s Stephanie Busari who conducted the interview said that a Nigerian bank has offered to pay for Olajumoke’s children’s education, up to the university.

With this clear statement of intent, the bank in question is very likely Stanbic IBTC. Olajumoke’s success story continues to stun many people in the world. Last week, Sujimoto Construction company gave her a furnished luxury apartment in Lagos, while Finishing School, Poise Nigeria accepted her as a student in their academy.